Laws, Wars, and a Lot of Politics: This Week in the Book Pages 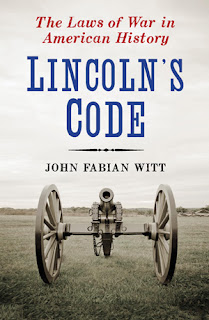 I had difficulty putting down John Fabian Witt's, Lincoln's Code: The Laws of War in American History this week, so I was delighted to read Gary J. Bass's review of in the New York Times.  As Bass puts it, the book is "magnificent."  Here is a sample of the review:


“Lincoln’s Code” is both a celebratory chronicle of American lawmaking and a gruesome record of American wartime cruelty, from William Tecumseh Sherman’s rampage through Georgia and South Carolina to the Indian wars. In an effort to make sense of what animates the “world’s only military superpower” today, Witt looks backward: “From the Revolution forward, the United States’ long history of leadership in creating the laws of war stands cheek by jowl with a destructive style of warfare.”

For more books on war and foreign affairs this week, see a review of H.W. Brands The Man Who Saved the Union: Ulysses Grant in War and Peace (Doubleday) and Max Boot's review of The Endgame: The Inside Story of the Struggle for Iraq, from George W. Bush to Barack Obama (Pantheon) by Michael R. Gordon and Bernard E. Trainor, both in the Wall Street Journal.  The Washington Post has a review of Fredrik Logevall's Embers of War: The Fall of an Empire and the Making of America's Vietnam (Random House), and a review of  David G. Coleman's The Fourteenth Day: JFK and the Aftermath of the Cuban Missile Crisis (W.W.Norton).

With the first presidential debate coming up on Wednesday, there are plenty of reviews of books on politics and the presidency:   In the New York Times, you'll find reviews of Charles R. Kesler's I Am the Change: Barack Obama and the Crisis of Liberalism (Broadside) (here)  William H. Chafe's Bill and Hillary: The Politics of the Personal (Farrar, Straus and Giroux) (here), Robert W. Merry's Where They Stand: American Presidents in the Eyes of Voters and Historians (Simon and Schuster) (here), Jeffrey Toobin's The Oath: The Obama White House and the Supreme Court (Doubleday) (here) , Joseph Crespino's, Strom Thurmond's America, (Hill and Wang) (here), and E.J. Dionne, Jr's Our Divided Political Heart: The Battle for the American Idea in an Age of Discontent (Bloomsbury) (here).

Other reviews of possible interest this week, include a review of Nate Silver's The Signal and the Noise: Why So Many Predictions Fail-- but Some Don't (Penguin) in the LA Times, a review of Jonathan Kozol's Fire in the Ashes: Twenty-five years Among the Poorest Children in America (Crown) in the Washington Post, and a review of Hitler's Berlin: Abused City (Yale) by Thomas Friedrich in TNR: The Book
Posted by Clara Altman at 5:00 AM