"Proclaiming Emancipation": Series of Events at University of Michigan 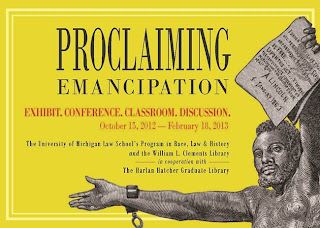 The University of Michigan Program in Race, Law, & History has put together an exciting series of events to commemorate the 150th anniversary of the Emancipation Proclamation.

Here's an excerpt from the announcement:


Presented by the Law School's Program in Race, Law & History and the William L. Clements Library, activities will run from Oct. 15, 2012, until Feb. 18, 2013. President Abraham Lincoln issued the Emancipation Proclamation as an executive order on Jan. 1, 1863. The commemoration will include an exhibit of documents and artifacts at the Hatcher Graduate Library, many of which are unique to the Clements Library collections and have never before been exhibited. Outside groups and classes are encouraged to arrange to visit it themselves; see the schedule of events for more information.

Organizers have also scheduled an academic conference for Oct. 26. Top scholars from all over the country, including Pulitzer Prize–winning historian Eric Foner and several from the University of Michigan Law School, will gather to discuss the various impacts the document has had on United States and world history.

"The Proclamation accelerated a massive human migration toward freedom, opened the door to the enlistment of black men in the Union Army, and marked a significant shift in executive power," the organizers write. "Today it remains a powerful, near-sacred artifact in our collective memory."

Speakers at the October 26 conference include:

For more information, follow the link.
Posted by Karen Tani at 3:00 PM