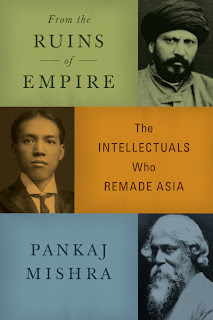 The New York Times has Hari Kunzru's review of From the Ruins of Empire: The Intellectuals Who Remade Asia (Farrar, Straus & Giroux) by Pankaj Mishra.  Kunzru writes:


Mishra, the Indian essayist and novelist, shows how, like their European and American counterparts, Asian intellectuals of the 19th and 20th centuries responded to the colonial encounter by constructing a binary opposition between East and West. From Ottoman Turkey to Meiji Japan, writers struggled in the face of the humiliating experience of subjugation. The superior technology and organization of the imperial powers were self-­evident. What was the correct response? Could new innovations and modes of production be grafted onto existing social structures, or did cherished ways of life and thought have to be abandoned?

In the Wall Street Journal, Hillel Halkin's review of Patrick Tyler's Fortress Israel: The Inside Story of the Military Elite Who Run the Country-- and Why They Can't Make Peace (Farrar, Straus & Giroux)


Have you ever wondered why Iran, after halting (according to Western intelligence reports) its nuclear weapons program in 2003, resumed it (according to more such reports) by 2005? Patrick Tyler, a former New York Times foreign correspondent, thinks he knows. It wasn't because the initial shock of the American invasion of Iraq had worn off. The Iranian nuclear program was probably restarted, Mr. Tyler believes, in reaction to a "clandestine war" waged by Israel against Iran—a war launched, he states in his new book "Fortress Israel: The Inside Story of the Military Elite Who Run the Country—And Why They Can't Make Peace," by the government of Benjamin Netanyahu that came to power following the 2009 Israeli elections.

The WSJ also has a review of Joseph Anton: A Memoir (Random House) by Salmon Rushdie.  Michael Moynihan writes, "Joseph Anton is hardly a conventional memoir.  It is written in the third person, a conceit that works well enough as a way of recounting the alienating experience of living under cover while hearing one's real name condemned by Muslim leaders world-wide."  And, a review of Karen Elliott House's On Saudi Arabia: Its People, Past, Religion, Fault Lines-- and Future (Knopf), and a review of Christopher Steiner's Automate This: How Algorithms Came to Rule Our World (Portfolio Penguin).

In TNR: The Book, John McWhorter reviews David Skinner's The Story of Ain't: America, Its Language, and the Most Controversial Dictionary Ever Published (Harper)-- "an exploration of the scandal over the publication of Webster's Third New International Dictionary of the English Language"-- and a review of Sasha Issenberg's The Victory Lab: The Secret Science of Winning Campaigns (Crown), 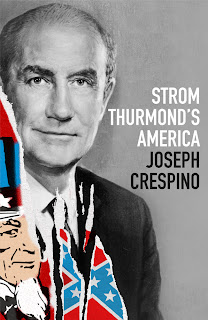 
Crespino encompasses a vast sweep of twentieth-century political history in America through his depiction of Thurmond’s life and times. Thurmond was first elected to public office in 1928—when he became superintendent of his home county at the age of twenty-five—and was a U.S. senator for forty-eight years; he also presaged the transformation of the South from solidly Democratic to solidly Republican, and the takeover of the GOP by Southern-inflected conservatism. Crespino is less successful, however, in arguing that his subject was central to the development of the modern Republican Party. Thurmond seems, rather, to have pursued a single-minded course of political opportunism, which sometimes coincided with and often benefited from the rising conservative movement.

Other reviews of interest this week: In the LA Times, a review of Juliet Barker's The Brontes: Wild Genius on the Moors-- The Story of a Literary Family (Pegasus), and in the Washington Post, a review of Kofi Annan's memoir Interventions: A Life in War and Peace (Penguin).  And in the New York Times (here) and TNR: The Book (here), reviews of Junot Diaz's This is How You Lose Her (Riverhead)