Coquillette and Kimball's "On the Battlefield of Merit"

Daniel R. Coquillette, Boston College Law School, and Bruce A. Kimball, the Ohio State University, have published On the Battlefield of Merit: Harvard Law School, the First Century, with the Harvard University Press: 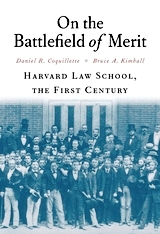 Harvard Law School is the oldest and, arguably, the most influential law school in the nation. U.S. presidents, Supreme Court justices, and foreign heads of state, along with senators, congressional representatives, social critics, civil rights activists, university presidents, state and federal judges, military generals, novelists, spies, Olympians, film and TV producers, CEOs, and one First Lady have graduated from the school since its founding in 1817.

During its first century, Harvard Law School pioneered revolutionary educational ideas, including professional legal education within a university, Socratic questioning and case analysis, and the admission and training of students based on academic merit. But the school struggled to navigate its way through the many political, social, economic, and legal crises of the century, and it earned both scars and plaudits as a result. On the Battlefield of Merit offers a candid, critical, definitive account of a unique legal institution during its first century of influence.


Daniel R. Coquillette and Bruce A. Kimball examine the school’s ties with institutional slavery, its buffeting between Federalists and Republicans, its deep involvement in the Civil War, its reluctance to admit minorities and women, its anti-Catholicism, and its financial missteps at the turn of the twentieth century. On the Battlefield of Merit brings the story of Harvard Law School up to 1909—a time when hard-earned accomplishment led to self-satisfaction and vulnerabilities that would ultimately challenge its position as the leading law school in the nation. A second volume will continue this history through the twentieth century.

HUP posted a pointer to an interview of Professor Coquillette on WBUR on the Royall family and the controversy over Harvard Law School’s official seal.