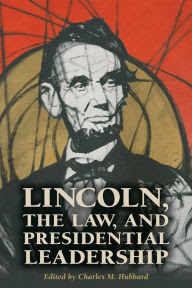 From his early years as a small-town lawyer through his rise to the presidency, Abraham Lincoln respected the rule of law. Secession and the Civil War, however, led him to expand presidential power in ways that, over time, transformed American society. In this incisive essay collection, recognized scholars from a variety of academic disciplines—including history, political science, legal studies, and journalism—explore Lincoln’s actions as president and identify within his decision-making process his commitment to law and the principles of the Constitution. In so doing, they demonstrate how wartime pressures and problems required that Lincoln confront the constitutional limitations imposed on the chief executive, and they expose the difficulty and ambiguity associated with the protection of civil rights during the Civil War.

The volume’s contributors not only address specific situations and issues that assisted in Lincoln’s development of a new understanding of law and its application but also show Lincoln’s remarkable presidential leadership. Among the topics covered are civil liberties during wartime; presidential pardons; the law and Lincoln’s decision-making process; Lincoln’s political ideology and its influence on his approach to citizenship; Lincoln’s defense of the Constitution, the Union, and popular government; constitutional restraints on Lincoln as he dealt with slavery and emancipation; the Lieber codes, which set forth how the military should deal with civilians and with prisoners of war; the loyalty (or treason) of government employees, including Lincoln’s domestic staff; and how Lincoln’s image has been used in presidential rhetoric. Although varied in their strategies and methodologies, these essays expand the understanding of Lincoln’s vision for a united nation grounded in the Constitution.

Lincoln, the Law, and Presidential Leadership shows how the sixteenth president’s handling of complicated legal issues during the Civil War, which often put him at odds with the Supreme Court and Congress, brought the nation through the war intact and led to a transformation of the executive branch and American society.