The Barbary Wars and the Making of America 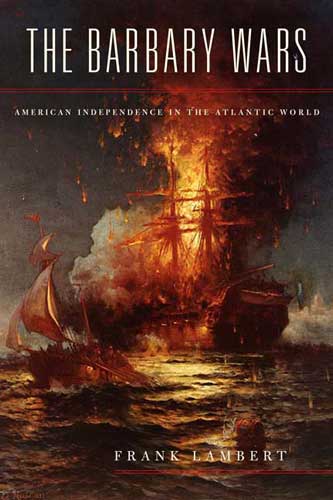 To continue a theme...here is a review from H-Maritime, by Timothy G. Lynch, Department of Global and Maritime Studies, California Maritime Academy, California State University, which he titled "Anti-Piracy and the Making of America." This essay makes the case that the Barbary Wars were crucial to American constitutional history. Lynch reviews Frank Lambert, The Barbary Wars: American Independence in the Atlantic World (Hill and Wang, 2005). The review begins:
In this slim and eminently readable volume, author Frank Lambert makes a case for the Barbary Wars as the first true test of American independence. Lambert, whose previous works deal with early American religious history, goes to great lengths to show that these disputes between North African Muslims and North American Christians were rooted in economic issues, and not in religious or cultural ones. Further, Lambert argues that the thirty-three years (1783-1816) of tension between the United States and the Barbary States were formative ones for the American military, as well as for its economic and diplomatic corps, allowing the infant republic to "extend its newly won independence to overseas commerce" (p. 7). Lambert uses the vehicle of the Barbary Wars to investigate such critical issues as the switch from the Articles of Confederation to the Constitution, and the need for an independent foreign policy.

Lambert skillfully addresses the American-Barbary disputes in the context of a wider Atlantic and international realm, giving a richly detailed and highly nuanced appreciation for the dizzying array of events that marked Mediterranean and North African history from the Crusades through the eighteenth century. Operating on the margins of the great power struggles of their day, the Barbary states were political and economic opportunists preying on any ships that scooted too close to their well-defended shores. Lambert even asserts, "pirating in the Barbary States was a capitalist enterprise" (p. 37). Theoretically vassals of the Ottoman sultanate in Turkey, the Barbary deys had routinely collected ransom from European traders who wished to trade unmolested in the Mediterranean. Notoriously fickle, the states of Algiers, Morocco, Libya and Tunisia routinely ripped up these agreements, captured the ships of "trespassing" entrepreneurs, and enslaved their crews. Rather than risk a costly military expedition, most Europeans agreed to pay a ransom for the captives and allotted the Barbary States an annual tribute to protect their trade. Once the United States secured its independence from Great Britain, it lost the protection of the British fleet. Barely a year after the Treaty of Paris guaranteeing its freedom, a band of Moroccan brigands seized the American brig Betsey. This placed the United States in the most unpropitious of circumstances--it lacked a navy (the last vessels having been sold off in 1785 to finance the mounting war debt) and, at the same time, it needed to protect its trade, as well as its independence.