Ownby reviews Tuck, Beyond Atlanta: The Struggle for Racial Equality in Georgia

Ted Ownby, Univ. of Mississippi, has just posted a review on H-Law of Stephen Tuck, Beyond Atlanta: The Struggle for Racial Equality in Georgia, 1940-1980 (University of Georgia Press, 2003). Ownby begins:
Stephen Tuck's book does a superior job detailing the various movements that coa 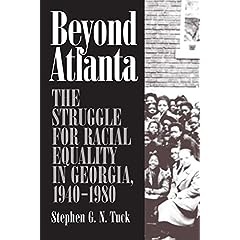 lesced or coincided as part of the civil rights movement in Georgia. Following the lead of many scholars who have called for local approaches to the movement, Tuck studies numerous Georgia communities, individuals, and movements to chart the nature and direction, goals and strategies, personalities and challenges, of the various struggles. The book emphasizes multiplicity.Different places had different types of movements, and those movements went indifferent directions.
The book shows the author has taken note of the various emphases popular in recent scholarship about the civil rights movement. Tuck studies both African Americans and whites, considers economics and the national context, studies religious groups, women, students, and urban leaders without suggesting that any group dominated the movement, pays more attention to the NAACP than many scholars and, above all, emphasizes variety in local contexts, leadership,strategies, and goals.
At the heart of the book are comparisons between the movement in Atlanta and the rest of Georgia....

The principal question raised in the review is about civil rights historiography. Ownby writes:

The primary concern about this book relates to its approach, which studies the civil rights movement at the local level. Is it possible that multiplicity and complexity have taken over our forms of analysis, and that scholars no longer seek main themes and broad explanations? Saying that things were complex is almost always true. Saying that things had different histories in different places is usually true as well. Tuck's book is far better than this oversimplification implies, and the author, to be fair, recognizes the potential problem. He writes early in the book that "the danger of a state study is that it produces a multiplicity of micro-histories and a proliferation of detail" (p. 5). But the broad point seems accurate--this book is best at telling numerous stories and noting how they differed from other stories. In doing so, it rejects any broad conclusions as too simple.

For the full review, click here.
Posted by Mary L. Dudziak at 12:56 PM