Garrow on Toobin, The Nine

David Garrow, Cambridge University, has a sharp review of Jeffrey Toobin, The Nine: Inside the Secret World of the Supreme Court in today's Los Angeles Time 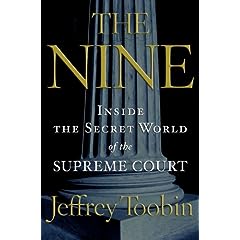 s, taking him to task for relying heavily on anonymous sources and, Garrow says, ignoring contrary archival evidence and on-the-record sources, resulting in a book that "showcases debatable opinions rather than thorough research or original reporting." Ouch! Here's a sample:

In recent years, any high court ruling citing legal developments elsewhere in the world has drawn angry condemnation from Justice Antonin Scalia and a host of conservative politicians and commentators. Toobin asserts that foreign contacts have had "a profound impact on the Court," pushing it "and especially Kennedy -- to the left." But he fails to square this claim with Kennedy's decisive votes during the most recent term, which undeniably turned the court into what even he calls "a dramatically more conservative institution." Such an exaggerated characterization of Kennedy suggests a calculated desire to invite controversy....

In his epilogue, Toobin disputes Roberts' avowal that judges "are like umpires" and "are not politicians." In fact, Toobin declares, "it is ideology, not craft or skill, that controls the outcome of cases," and "what matters is not the quality of the arguments but the identity of the justices." And since ideology "means everything on the Supreme Court," one factor alone will determine the court's future: "the outcomes of presidential elections." Who will name the successors for the justices most likely to retire next -- Justices John Paul Stevens, Souter and Ginsburg -- is indeed important, but Toobin's insistent reductionism of justices' decision-making to the sole dimension of left-right ideology is far too shallow. Legal scholars such as Harvard's Frederick Schauer warn about pundits' "tendency to exaggerate the Court's importance" and oversimplify its decisions. That admonition is essential when confronted with so purposely provocative a book as "The Nine."

More takes on Toobin are here.
Posted by Mary L. Dudziak at 7:52 AM