Foner on Musharraf on Lincoln

Eric Foner, DeWitt Clinton Professor of History at Columbia, just published Reading Lincoln in Pakistan in The Nation and on HNN. He writes: 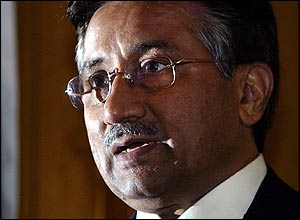 Every generation and every political movement, it seems, reinvents Abraham Lincoln in its own image. But rarely has he been invoked so cynically as on November 4, when President-General Pervez Musharraf quoted extensively from Lincoln to justify the suspension of the Pakistani Constitution and the imposition of martial law. Musharraf declared that during the Civil War, Lincoln "broke laws, he violated the Constitution, he usurped arbitrary power, he trampled individual liberties." He quoted from an 1864 letter to Albert Hodges, in which Lincoln declared that "measures, otherwise unconstitutional, might become lawful, by becoming indispensable to the preservation of the Constitu

tion, through the preservation of the nation." Musharraf failed to note that in this letter, Lincoln was not defending the abrogation of democracy or the suppression of civil liberties but his decision to emancipate the slaves.

But even on the grounds of civil liberties and executive authority, the General's effort to wrap himself in Lincoln's mantle is ludicrous. Lincoln did take actions that interfered with Americans' freedoms and bent the Constitution. At the outset of the Civil War, without Congressional authorization, Lincoln raised troops, appropriated funds, suspended habeas corpus in Maryland and ignored a ruling by Chief Justice Roger Taney ordering the release of a man arrested for aiding the rebellion. Later, Lincoln extended the suspension of habeas corpus to include the entire North. Under his authority as Commander in Chief, the military arrested thousands, most of them accused of actively aiding the Confederacy, but some of nothing more than criticizing Administration policies. The most notorious was Clement Vallandigham, a Congressman from Ohio, convicted by a military tribunal of disloyalty for a speech opposing the draft. Lincoln ordered him deported to the Confederacy.

These policies are today viewed as serious blemishes on the history of American freedom. But they do not add up to a general assault on the Constitution and all were ratified by a democratically elected Congress. Here is what Lincoln did not do and Musharraf did. He did not suspend the Constitution, remove the Chief Justice, impose martial law upon the entire country, incarcerate dozens of lawyers, arrest leaders of the opposition party and human rights advocates or ban political demonstrations. Perhaps most important, he did not disrupt the operation of political democracy. Throughout the Civil War, elections were held on schedule. In 1862 the Democratic opposition won sweeping gains in Congressional contests, but Congress continued to meet. During the summer of 1864, Lincoln feared he might be defeated for re-election, but the election went ahead as scheduled. Lincoln insisted that the United States must demonstrate that even in the midst of a civil war, a democracy could submit its policies to the judgment of the people.
The rest is here.
Image credits: Mushareff, Lincoln.
Posted by Mary L. Dudziak at 11:24 PM