The Invention of Air: A Story of Science, Faith, Revolution, and the Birth of America by S

teven Johnson, a biography of 18th century scientist Joseph Priestly who discovered oxygen, is reviewed by Andrew O'Hehir for Salon. He finds it "a slender, deceptively casual book," that "aims high." Historians of early American politics will be interested in this scientist who was friends with Benjamin Franklin, Thomas Jefferson, and others.

BANQUET AT DELMONICO'S: Great Minds, the Gilded Age, and the Triumph of Evolution in America by Barry Werth is reviewed for the Washington Post. Louis Bayard calls the book a "wide-ranging account of social Darwinism's rise in America." Hat tip.
Torture Team: Rumsfeld's Memo and the Betrayal of American Values by Philippe

Sands; The Trial of Donald Rumsfeld: A Prosecution by Book by Michael Ratner and the Center for Constitutional Rights; and Administration of Torture: A Documentary Record from Washington to Abu Ghraib and Beyond by Jameel Jaffer and Amrit Singh are discussed by David Cole in a New York Review of Books essay, What to Do About the Torturers? Setting these works in the context of other recent books on torture, Cole finds that "undoubtedly the most unusual and deeply revealing take on the subject is the work of the British lawyer and law professor Philippe Sands. As Alexis de Tocqueville showed long ago, sometimes it takes the eyes of an outsider to show us ourselves." 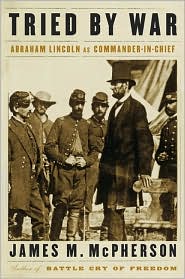 The author "does not merely analyze the documentary evidence. Instead, he personally set out to interview as many of the participants in this sordid tale as would talk to him. Remarkably, nearly all of them did." Because much is known about the development of U.S. torture policy, Sand's book "is illuminating not so much for breaking new factual ground as for the human insight he brings to the events."
TRIED BY WAR: ABRAHAM LINCOLN AS COMMANDER IN CHIEF by James M. McPherson is reviewed by John M. Taylor in the Washington Times, who finds it "a stroll through highlights of the war focusing on Lincoln's dealings with his generals."
Posted by Mary L. Dudziak at 11:09 AM

And legal historians will also be delighted to recall that Joseph Priestley is one of us. He's the author of an astonishing legal history of western civilization, Lectures on History and General Policy (1788).