American Exceptionalism (for and against), the Framing and more in the Book Reviews

American exceptionalism is the focus of a review of A Tolerable Anarchy: Rebels, Reactionaries, andthe Making of America's Freedom by Jedediah Purdy and The Myth of American Exceptionalism by Godfrey Hodgson, taken up by Art W

inslow in the Los Angeles Times. "Of the two," Winslow writes, "Purdy is more accepting of the concept of American exceptionalism but sees it as a condition requiring ongoing adaptation, a 'living tradition.'"

Purdy's book is loosely about pushing the boundaries of liberty and searching out the common good, in pursuit of what John Adams called "the sensations of freedom," often as revealed in presidential rhetoric. Tracking the speeches of various U.S. presidents, he laments that "the divorce of civic identity from government, which Nixon set in motion, is nearly complete in Bush's speeches," and that in this conceptual shift, government "is the thing that went away and cleared the space now filled by private virtue."

The idea of American exceptionalism is a comparative argument, but is usually s

imply assumed and not based on comparative evidence. So Hodgson's book is most welcome. According to Winslow, Hodgson "concedes that a highly qualified version of exceptionalism has existed but within relatively narrow historical confines," and "it is 'less exceptional than is often claimed."

Sketching out international contexts from the Revolution forward, Hodgson points out that the American revolt was but one theater in a global struggle between England and France (a viewpoint also argued recently by Thomas Bender in "A Nation Among Nations").... Hodgson takes pains to point out that principles of the Revolution were "deeply rooted in European origins" and English Common Law but that Americans were "increasingly attracted to a national ideology that cast them as redeemers of a sinful world." Other than that distinction, much of his historical overview is an attempt to correct the record by showing how similar experience was in U.S. and European industrial nations, eroding the perception of American difference.

Continue reading here. Purdy is also reviewed, along with THE FUTURE OF LIBERALISM by Alan Wolfe, by Gary Hart in the New York Times. 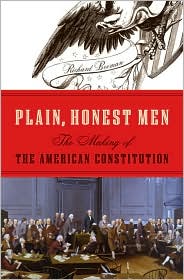 Meanwhile, "Do we need another narrative history of the Constitutional Convention of 1787?" Mary Beth Norton asks, turning to PLAIN, HONEST MEN: The Making of The American Constitution by Richard Beeman in the Washington Post. Beeman has a contemporary purpose:

He hopes to persuade those who think that the "original intent" of the Founding Fathers can be discerned and should be followed today (read: Justice Antonin Scalia and his acolytes) that the framers approached their task with "uncertainty and humility," and that those who interpret their words now should adopt the same stance. As Beeman remarks, "there was precious little agreement among even those who had drafted the Constitution as to the precise meaning" of many clauses.

The author "certainly succeeds in showing that the convention's participants had diverse opinions about how to solve the primary problems of the prior Articles of Confederation: lack of a national taxing power and lack of national control over commerce. They also disagreed fundamentally about the proper relationship between states and nation, and about the nature and extent of presidential powers." Read the rest here.
Raymond Arsenault takes up FAMILY PROPERTIES: Race, Real Estate, and the Exploitation of Black Urban America by Beryl Satter in the New York Times.
Posted by Mary L. Dudziak at 9:55 AM