Reviewed: Nelson on The Common Law of Colonial America, Shain on Rights at the Founding, and Feldman on Free Expression

The Common Law of Colonial America: Volume I: The Chesapeake and 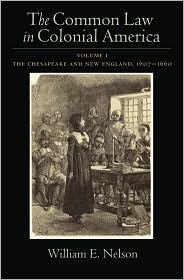 This slender volume by an outstanding scholar of colonial law sheds much light on continuing differences in legal and political culture among states on the Atlantic seaboard. It begins with the conventional premise that “Virginia was founded primarily for economic profit; New England, primarily to create a religious utopia; and Maryland, primarily to provide a haven for persecuted Roman Catholics.” As a result, Virginia law began as a body of coercive statutes (Dale’s Laws of 1611), replaced by a new codification 1n 1650 designed to enforce and extract labor; New England law was founded on views resembling the Protestant approach to the Bible, in which pre-existing English texts were of limited importance; while the Catholic minority in Maryland consciously adopted English common law to provide a fixed standard to shield a religious minority from future majority oppression. Virginia ultimately turned toward the English common law to provide assurance to providers of capital and because the colony could no longer be governed on a military command system.

Continue reading here.
Also in the Law and Politics Book Review, The Nature of Rights at the American Foundi 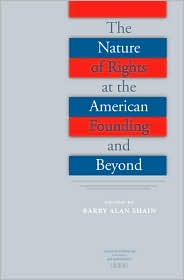 ng and Beyond by Barry Alan Shain (ed) is reviewed by Paul A. Passavant, Department of Political Science, Hobart and William Smith Colleges. There has been much scholarship over the past three decades about rights, Passavant writes.

Many of these interventions, however, take for granted that the United States has always had a liberal or “Lockean” political or legal culture, and that this is a culture of individualism. American historians have troubled such assumptions by returning to the late colonial and founding period in American history to rediscover influences from the Scottish Enlightenment or civic republicanism. THE NATURE OF RIGHTS AT THE AMERICAN FOUNDING AND BEYOND, contains essays, organized more or less historically, from scholars who have added to our understanding of rights in American history and American political thought in especially significant ways over the last thirty years. Its main strength is that it contains exemplary essays from those whose contributions have spanned multiple volumes. Here, in one place, the reader can find an essay that seems to capture a scholar’s most important findings over the course of a career – such as John Philip Reid’s contribution discussing the importance of the British Constitution and the rights of Englishmen to late colonial and early revolutionary struggles.

This collection includes scholars of the revolutionary or founding period who bring their great breadth and depth of knowledge regarding these eras to bear on a particularly specific aspect of rights. Through this focused inquiry, they unpack late 18th century America as a political culture unleashing the potential for future political and legal struggles over rights. Jack Rakove’s [*137] essay, for instance, describes the dilemma of declaring rights the framers faced since any declaration at that historical moment risked both later interpretive ambiguity and risked limiting, unintentionally, rights later generations might find necessary (Thomas Jefferson’s view was that half a loaf was better than none). Gordon Wood’s contribution shows that rights have existed within a variety of political or legal orders and have become reinscribed within new political settings. The medieval king had a right to govern, and the English had their feudal rights, but over the course of the 17th century, rights came to be understood as something to be held against the monarch while Parliamentary sovereignty was understood to be the protector of the people’s rights. The American experience grew out of a tradition of rights claims against a monarch, but after the experiment with state sovereignty under the Articles of Confederation, republicanism developed, in the American context, a recognition that legislatures and executives, though agents of the people, might also threaten the rights of the people as monarchs once had.

Read the rest here.
Also reviewed is Free Expression and Democracy in America: A History by S 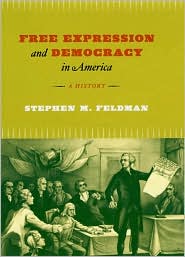 Stephen Feldman has created a history of free expression and democracy that describes and analyzes the mainstream of American history through two ever-present and complementary traditions: one of suppression and one of dissent. From the War of Independence to the War on Terror, everyone who matters is engaged in, or by, this tug of war. Presidents, political theorists, judges, and the public, support dissent and then worry that it has gone too far. It is no surprise that in 200 years of American history freedom of expression came to mean different things to different generations, but if there is one trend that you can count on it is this: in times of war the tradition of suppression is in the ascendant. Feldman adds to the basic duality of his suppression-dissent framework an overarching theory of American political history – i.e., the transition from a republican democracy to today’s pluralistic democracy. The result is not a simple four by four matrix; in Feldman’s hands we have a thorough and engaging 470-page treatise (plus 60 pages of footnotes).

Although he quibbles with aspects of the book, O'Callaghan finds that "Nevertheless, given the enormity of this undertaking, Feldman has done a remarkable job."
The full review is here.
Posted by Mary L. Dudziak at 1:47 PM