Lacey, Women, Crime and Character: From Moll Flanders to Tess of the D'Urbervilles

Nicola Lacey, Women, Crime, and Character: From Moll Flanders to Tess of the D'Urbervilles was reviewed in the Times Higher Education supplement (UK) a w 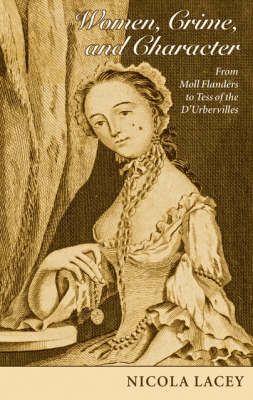 hile ago, but I've just come across it. Tess Cosslett, Lancaster University, writes:

Nicola Lacey's book is a version of her 2007 Clarendon Law Lectures; although "expanded", it is shorter, and with a narrower, tighter focus than the usual academic monograph. Her argument participates in, and adds to, the growing field of law and literature studies, which includes Alexander Welsh's Strong Representations: Narrative and Circumstantial Evidence in England (1992), and Jan-Melissa Schramm's Testimony and Advocacy in Victorian Law, Literature and Theology (2000). But whereas these books conduct detailed and illuminating readings of literary texts in the light of 19th-century legal changes, Lacey's book works the other way round: a complex argument about the development of legal concepts is backed up by readings of literary texts....

She argues that in the 18th and 19th centuries there was a general development away from ideas of external "character" as a legal concept and defence and towards more internal concepts of individual responsibility - although she also shows that both these ways of thinking coexisted for a long while. Women are affected by these changes - when recognisable markers of social status become more difficult to rely on, as a result of urbanisation, women's correct behaviour is the more policed as a sign of respectability.

The central development that Lacey attempts to explain relates to the ways in which female offenders are portrayed in the novel. Moll Flanders, the cheerful criminal heroine of Defoe's early 18th-century novel, becomes unthinkable in the 19th century, supplanted by victim-heroines such as Hardy's Tess of the D'Urbervilles. Lacey, however, argues against the idea that women were perceived as without agency in this later period. Instead, they can be seen as agents who were hampered by social constraints and codes.
Here, almost entirely literary evidence is invoked, from works such as Vanity Fair and Middlemarch, the novels being used to demonstrate widespread cultural assumptions.