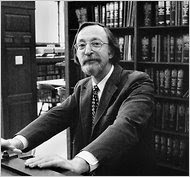 Today's NYTimes (12/26/10) has an obituary on Mr. Cohen that has interested me in his very interesting career, especially how he was not comfortable with the practice of law, leading to his great library works and writings.