Romero, "A War To Keep Alien Labor out of Colorado" 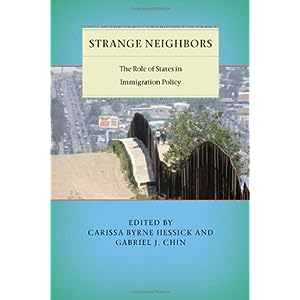 Since its founding, the U.S. has struggled with issues of federalism and states’ rights. In almost every area of law, from abortion to zoning, conflicts arise between the states and the federal government over which entity is best suited to create and enforce laws. In the last decade, immigration has been on the front lines of this debate, with states such as Arizona taking an extremely assertive role in policing immigrants within their borders. While Arizona and its notorious SB 1070 is the most visible example of states claiming expanded responsibility to make and enforce immigration law, it is far from alone. An ordinance in Hazelton, Pennsylvania prohibited landlords from renting to the undocumented. Several states have introduced legislation to deny citizenship to babies who are born to parents who are in the United States without authorization. Other states have also enacted legislation aimed at driving out unauthorized migrants.

Strange Neighbors explores the complicated and complicating role of the states in immigration policy and enforcement, including voices from both sides of the debate. While many contributors point to the dangers inherent in state regulation of immigration policy, at least two support it, while others offer empirically-based examinations of state efforts to regulate immigration within their borders, pointing to wide, state-by-state disparities in locally-administered immigration policies and laws. Ultimately, the book offers an extremely timely, thorough, and spirited discussion on an issue that will continue to dominate state and federal legislatures for years to come.

The TOC is here. LHB readers may be particularly interested in Part II: "Historical Antecedents to the Modern State and Local Efforts to Regulate Immigration." The featured essay, by Tom I. Romero, II (University of Denver), is titled "'A War To Keep Alien Labor out of Colorado: The 'Mexican Menace' and the Historical Origins of Local and State Anti-Immigration Initiatives."
Posted by Karen Tani at 9:30 AM