Katz's "Women in the Mosque"

New from Columbia University Press is Women in the Mosque: A History of Legal Thought and Social Practice by Marion Holmes Katz, a professor of Middle Eastern and Islamic studies at New York University: 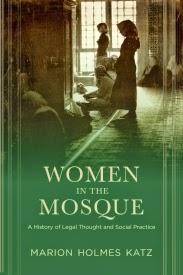 Juxtaposing Muslim scholars’ debates over women’s attendance in mosques with historical descriptions of women’s activities within Middle Eastern and North African mosques, Marion Holmes Katz shows how over the centuries legal scholars’ arguments have often reacted to rather than dictated Muslim women’s behavior.

Tracing Sunni legal positions on women in mosques from the second century of the Islamic calendar to the modern period, Katz connects shifts in scholarly terminology and argumentation to changing constructions of gender. Over time, assumptions about women’s changing behavior through the lifecycle gave way to a global preoccupation with sexual temptation, which then became the central rationale for limits on women’s mosque access. At the same time, travel narratives, biographical dictionaries, and religious polemics suggest that women’s usage of mosque space often diverged in both timing and content from the ritual models constructed by scholars. Katz demonstrates both the concrete social and political implications of Islamic legal discourse and the autonomy of women’s mosque-based activities. She also examines women’s mosque access as a trope in Western travelers’ narratives and the evolving significance of women’s mosque attendance among different Islamic currents in the twentieth century.

Intisar A. Rabb, Harvard Law School, and director of the Islamic Legal Studies Program, says of the book:


Marion Holmes Katz brings to light and adds context to the fascinating history of women’s access to mosques through a dexterous presentation of a wide range of legal sources, travel accounts, contemporaneous Christian and Jewish accounts, literature, and a unique sixteenth-century manuscript recounting when women contested the ruling authorities’ attempt to ban them from Islam’s most sacred mosque in Mecca. A must-read for anyone interested in a solid historical account related to issues of women and gender in Islam.