Smith, "Sir Edward Coke and the Reformation of the Laws"

Via David Schorr's recent call for more legal historical work on swamp drainage (he makes the case!), we realized that we never profiled this book, released in November 2014: Sir Edward Coke and the Reformation of the Laws: Religion, Politics and Jurisprudence, 1578–1616 (Cambridge University Press), by David Chan Smith (Wilfrid Laurier University). A description from the Press: 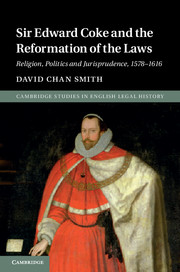 Throughout his early career, Sir Edward Coke joined many of his contemporaries in his concern about the uncertainty of the common law. Coke attributed this uncertainty to the ignorance and entrepreneurship of practitioners, litigants, and other users of legal power whose actions eroded confidence in the law. Working to limit their behaviours, Coke also simultaneously sought to strengthen royal authority and the Reformation settlement. Yet the tensions in his thought led him into conflict with James I, who had accepted many of the criticisms of the common law. Sir Edward Coke and the Reformation of the Laws reframes the origins of Coke's legal thought within the context of law reform and provides a new interpretation of his early career, the development of his legal thought, and the path from royalism to opposition in the turbulent decades leading up to the English civil wars.

More information is available here. Schorr notes that the book was recently reviewed here.
Posted by Karen Tani at 12:30 AM