Here's an exchange about Federalist No. 77 and the Removal Power:

Seth Barrett Tillman has posted The Puzzle of Hamilton's Federalist No. 77, forthcoming in Harvard Journal of Law and Public Policy 33 (2010): 1-18.

The Founders, the authors of the Constitution of 1787, much like you and me, were flesh-and-blood human beings. As a result, we expect to find errors and exaggeration in their written works. There is nothing new about that insight. But one alleged error has always struck me as somewhat different from other alleged errors. I am speaking of Hamilton's 1788 publication: The Federalist No. 77. There he wrote: 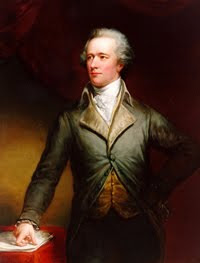 IT HAS BEEN MENTIONED as one of the advantages to be expected from the co-operation of the Senate, in the business of appointments, that it would contribute to the stability of the administration. The consent of that body would be necessary to displace as well as to appoint. A change of the Chief Magistrate, therefore, would not occasion so violent or so general a revolution in the officers of the government as might be expected, if he were the sole disposer of offices. Where a man in any station had given satisfactory evidence of his fitness for it, a new President would be restrained from attempting a change in favor of a person more agreeable to him, by the apprehension that a discountenance of the Senate might frustrate the attempt, and bring some degree of discredit upon himself. Those who can best estimate the value of a steady administration, will be most disposed to prize a provision which connects the official existence of public men with the approbation or disapprobation of that body which, from the greater permanency of its own composition, will in all probability be less subject to inconstancy than any other member of the government.

This is the enigmatic great white whale among Founding-era documents.

However, this understanding of The Federalist No. 77, the standard view, the view that Hamilton was speaking to "removal," creates as many problems as it might resolve. And this is true without regard to whether or not you think Hamilton correct or erred. First, the standard view is puzzlingly inconsistent with everything we know about Hamilton, the premier Founding-era spokesman for energy and unity in the Executive. How is it that he would concede a role for the Senate in regard to the removal of federal officers, if a contrary view were even remotely tenable? Second, Hamilton's opining on the scope of the removal power is inconsistent with his plan for and the purpose of The Federalist. His plan for The Federalist was to discuss the defects of the then-current regime, the government under the Articles, the need for a more energetic government, and finally, to provide an article-by-article, clause-by-clause defense of the newly proposed Constitution of 1787 as consistent with the principles of Republican government, liberty, and property. Removal is simply not expressly addressed in the Constitution. To bring up "removal" is just bad tactics - why open up that can of worms, particularly where one's conclusion lacks direct textual support or any closely reasoned argument. Was Hamilton really such a poorly skilled tactician and propagandist? There is a third problem with the standard view .... This problem is not historical, but textual. If you read Hamilton's statement, you will notice that he does not actually use the word "removal" or any variant on "removal." Rather, he uses the word "displace." And that is the key to this ancient intellectual puzzle. Hamilton was not speaking to the power of removing federal officers, rather he was speaking to who had authority to displace federal officers. The two words are akin, but they are not at all times and for all purposes the same.

Jeremy D. Bailey, Political Science, University of Houston, has posted his response, The Traditional View of Hamilton’s Federalist No. 77 and an Unexpected Challenge: A Response to Seth Barrett Tillman, which is also forthcoming in Harvard Journal of Law and Public Policy, 33 (2010).

In Federalist No. 77, Alexander Hamilton writes that the Senate's consent would be necessary to "displace" a federal executive officer. Because Hamilton is well known as a defender of executive power, this comment has long been a puzzle. Seth Barrett Tillman proposes to solve this puzzle by reading "displace" as "replace" rather than "remove." If Tillman is correct, then he would not only solve a major interpretative dilemma, but also would liberate those who argue on originalist grounds for unilateral presidential removal powers.

This paper responds to Tillman's argument by considering three ways to consider Hamilton's No. 77: Contemporary evidence, post-1788 evidence, and the structure and place of Hamilton's case for executive energy in The Federalist. It argues that the third way is the most instructive and that this method confirms the traditional reading of Federalist No. 77, that is, that Hamilton believed the president did not hold unilateral removal powers.