New on Et seq., the blog of the Harvard Law School Library, is a post on an expense book that provides some insight into the expenses a lawyer might incur in setting out to practice in Boston after the Civil War. The post commences: 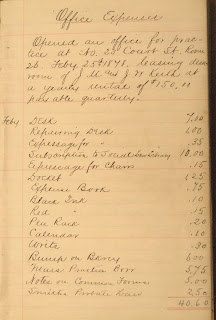 As a newly minted lawyer in the late nineteenth century, what did you need--and how much did it cost--to set yourself up as a solo practitioner in Boston? The Library has recently acquired a lawyer’s manuscript expense book that provides an answer. W. Frederick Kimball (1851 – 1915) practiced law in Boston from 1878 until the beginning of World War I. After graduating from Harvard College in 1875 and studying briefly with attorney Alfred Hemenway, he enrolled in the recently opened Boston University Law School where he received his LL.B in 1877. Kimball was admitted to the Suffolk County bar on February 18, 1878 and began his practice a week later. His accounting ledger records the financial details of the first six years of his practice; in his first year, Kimball generated nearly $624 in fees, and by his fifth year was earning more than $2,500 in fees.