Gallanis on Counsel at the Old Bailey 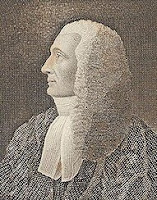 Thomas P. Gallanis, University of Iowa College of Law, has posted The Mystery of Old Bailey Counsel, which originally appeared in Cambridge Law Journal 65 (March 2006): 159-173. The article “proffers a hypothesis about a persistent historical mystery: Why did the use of defense lawyers in felony trials at the Old Bailey in London increase so noticeably in the last quarter of the eighteenth century?”