Andrew Fitzmaurice, an Associate Professor of History at the University of Sydney, has published Sovereignty, Property and Empire, 1500–2000, with Cambridge University Press: 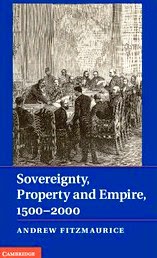 This book analyses the laws that shaped modern European empires from medieval times to the twentieth century. Its geographical scope is global, including the Americas, Europe, Africa, Asia, Australia and the Poles. Andrew Fitzmaurice focuses upon the use of the law of occupation to justify and critique the appropriation of territory. He examines both discussions of occupation by theologians, philosophers and jurists, as well as its application by colonial publicists and settlers themselves. Beginning with the medieval revival of Roman law, this study reveals the evolution of arguments concerning the right to occupy through the School of Salamanca, the foundation of American colonies, seventeenth-century natural law theories, Enlightenment philosophers, eighteenth-century American colonies and the new American republic, writings of nineteenth-century jurists, debates over the carve up of Africa, twentieth-century discussions of the status of Polar territories, and the period of decolonisation.

Contents after the jump.