New from the University of Oklahoma Press: A Step toward Brown v. Board of Education: Ada Lois Sipuel Fisher and Her Fight to End Segregation, by Cheryl Elizabeth Brown Wattley (University of North Texas, Dallas, College of Law). A description from the Press: 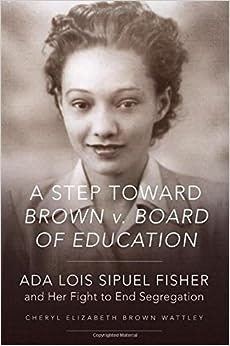 In 1946 a young woman named Ada Lois Sipuel Fisher (1924–1995) was denied admission to the University of Oklahoma College of Law because she was African American. The OU law school was an all-white institution in a town where African Americans could work and shop as long as they got out before sundown. But if segregation was entrenched in Norman, so was the determination of black Oklahomans who had survived slavery to stake a claim in the territory. This was the tradition that Ada Lois Sipuel sprang from, a tradition and determination that would sustain her through the slow, tortuous path of litigation to gaining admission to law school. A Step toward Brown v. Board of Education—the first book to tell Fisher’s full story—is at once an inspiring biography and a remarkable chapter in the history of race and civil rights in America.

Cheryl Elizabeth Brown Wattley gives us a richly textured picture of the black-and-white world from which Ada Lois Sipuel and her family emerged. Against this Oklahoma background Wattley shows Sipuel (who married Warren Fisher a year before she filed her suit) struggling against a segregated educational system. Her legal battle is situated within the history of civil rights litigation and race-related jurisprudence in the state of Oklahoma and in the nation. Hers was a test case organized by the NAACP (National Association for the Advancement of Colored People) to go all the way to the U.S. Supreme Court and, as precedent, strike another blow against “separate but equal” public education.

Fisher served as both a litigant, with Thurgood Marshall for counsel, and, later, a litigator; both a plaintiff and an advocate for the NAACP; and both a student and, ultimately, a teacher of the very history she had helped to write. In telling Fisher’s story, Wattley also reveals a time and a place undergoing a profound transformation spurred by one courageous woman taking a bold step forward.


“Cheryl Wattley has written a carefully researched and very relevant account of the legal and human-relations significance of Ada Lois Sipuel Fisher's trailblazing court case. But her book offers much more, including the many compelling backstories that made Ada Lois a hero to those of us who dared challenge racial segregation and discrimination in Oklahoma and elsewhere. This book should be read by everyone, especially legal scholars, civil rights activists, historians, social scientists, and students.” —George Henderson

More information is available here.
Posted by Karen Tani at 11:00 AM