Through the thoughtfulness of Professor (and LHB Guest Blogger) Sarah Barringer Gordon we have the following announcement of the Inner Temple Book Prize, “the leading legal literary award.” 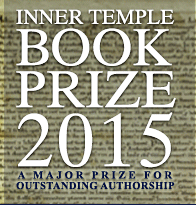 The Inner Temple announces the launch of its third triennial book prize.  The award of the Prize will coincide with the 800th anniversary of the sealing of Magna Carta, and we anticipate that it will play an integral role in the legal world's commemorations of the Charter. HRH The Princess Royal will once again stand as the Patron of the prize, which will award £12,000 to the winning author and a further prize of £5,000 to a 'new author'.

These awards will go to those who make an outstanding contribution to the understanding of the law as administered in England and Wales.  All aspects of the legal world will be considered, including international law, comparative law, the law of the European Union, the Commonwealth (or other international organisation), legal history and biography, legal philosophy, sociology of law, or criminology and the treatment of offenders.

Entries first published between 2 February 2011 and 31st December 2014 are eligible.  The closing date for entries is 2 February 2015 and the prizes will be presented at an awards ceremony to be held at the Inner Temple on the 5th December 2015.  Further details and entry forms are available here.