The Black Book of Justice Holmes 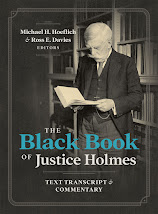 Justice Oliver Wendell Holmes, Jr. (1841-1935) is one of the most significant figures in American history, both as a judge and as a legal scholar. He was also, without question, one of the most well-read and erudite jurists of his age. Justice Holmes kept his personal notes in a volume that he called the Black Book. For more than 50 years, Holmes filled his Black Book with lists of books he read (including detailed notes on some of them), accounts of his travels, and even observations about flower blooms in Washington, DC, where he served on the U.S. Supreme Court from 1902 to 1932, and where he lived (except for summers at his place in Beverly Farms, MA) - and continued to make entries in his Black Book - until his death in 1935. This volume gives insight into his mind and activities for a half-century.

Introduction and Apologia
On the Distinction Between Transcription and Edition
M.H. Hoeflich

Oliver Wendell Holmes: Law and the Self-Creation of a Scholar-Jurist
M.H. Hoeflich

The Black Book and PreModern Law
Steven A. Epstein

“The True Reason Appears from the Old Books”: The Reading and Writing of a Common-Law Judge
Ross E. Davies

The Black Book of Justice Holmes: Text Transcript and Commentary provides an excellent accompaniment and aid to the original manuscript. The editors diligently undertake the formidable task of transcribing a significant portion of the Black Book while acknowledging imperfections in the endeavor due to Justice Holmes's copious, often hard to decipher notes and lists. Readers will also benefit from the inclusion of scholarly essays providing insights on the life and work of Justice Holmes through the lens of the Black Book.
Femi Cadmus
Archibald C. and Frances Fulk Rufty Research Professor of Law
Director, J. Michael Goodson Law Library, Duke University

The editors of the Black Book have produced a veritable Rosetta Stone for an important part of the Holmes oeuvre.... Now, Holmes students no longer need struggle with deciphering the justice's cramped handwriting and obscure references and can refer to reliable transcriptions linked to the original. A series of illuminating essays by the editors on several aspects of Holmes's jurisprudence completes this masterwork.

Scholars interested in the life and work of Justice Holmes have long been aware of his Black Book, ...[but it] has far more often been noted than read. Now two scholars who combine a strong interest in history and a longstanding experience with archival sources, M.H. Hoeflich and Ross Davies, have tackled the Black Book and succeeded in reproducing it in a printed version. They have also rounded up additional scholars to write essays on Holmes's life and career, his reading, his use of historical sources, and even the art of transcription. The result in an extremely useful contribution to the literature on Holmes and an indispensable service to future Holmes scholarship.
G. Edward White
David and Mary Harrison Distinguished Professor of Law
University of Virginia School of Law

For fans of Justice Holmes, or for those who merely seek to emulate his extraordinary wit and rhetoric, this book illuminates how he became the greatest writer to serve on the Supreme Court. Holmes became Holmes by voraciously consuming literature of all kinds, as evidenced by this masterfully annotated reading list. Holmes became one of America's greatest judges by maintaining a wide range of interests in literature, poetry, philosophy, history, theology, and law, all of which combined to feed his intellect, scholarship and humanism. This reproduction and transcription of his Black Book is an invaluable aid to scholars of the enigmatic and erudite Holmes.
Clare Cushman
Resident Historian,
Supreme Court Historical Society

The Black Book of Justice Holmes is a meticulous transcription of the often neglected and almost unreadable notes Holmes produced, for the most part, in preparing a series of lectures that evolved into his legal classic, The Common Law (1881). Offering an intimate look into Holmes's mind, The Black Book will be of inestimable value to scholars, while anyone interested in the iconic jurist should enjoy its introductory essays.
Jeff Broadwater
Professor Emeritus of History Barton College