TERROR AND CONSENT: The Wars for the Twenty-First Century by Philip Bobbitt (Alfred A. Knopf) is reviewed for the New York Times by Niall Ferguson. He finds it "quite simply the most profound book to have been written on the subject of American forei 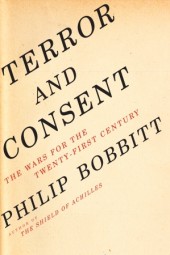 gn policy since the attacks of 9/11 — indeed, since the end of the cold war." According to Ferguson, "Bobbitt’s originality lies in his almost unique ability to synthesize three quite different traditions of scholarship": history, law, and military strategy.

In The Shield of Achilles (2002), Bobbit argued that "in the aftermath of the cold war, the traditional post-Westphalian ideal of the sovereign nation-state had become obsolescent. In the increasingly borderless world we associate with globalization, something new was emerging, which Bobbitt called (and continues to call) the 'market-state,'" in which the "state’s relationship to its citizens resembles that between a corporation and consumers."

In his new book,

Bobbitt’s central premise is that today’s Islamic terrorist network, which he calls Al Qaeda for short, is like a distorted mirror image of the post-Westphalian market-state: decentralized, privatized, outsourced and in some measure divorced from territorial sovereignty. The terrorists are at once parasitical on, and at the same time hostile toward, the globalized economy, the Internet and the technological revolution in military affairs. Just as the plagues in the 14th century were unintended consequences of increased trade and urbanization, so terrorism is a negative externality of our borderless world.