Fritz, American Sovereigns, just out from Cambridge UP

More from Christian G. Fritz, University of New Mexico: his new book, American Sovereigns: The People and America's Constitutional Tradition Before the Civil War, is just out from Cambridge University Press. Fritz has posted the prologue on SSRN. 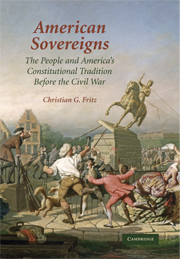 Shame on Cambridge University Press for pricing the book at $80 (before discounts). This ensures that mere mortals, including graduate students, will be unable to purchase it, and then also makes it hard for a book to garner the sales to justify a paperback. Be sure that your library knows that you want them to purchase a copy. If you want to assign the book but can't because of the price, let the author know. That will help him argue for a paperback.
Here's the book description:
American Sovereigns: The People and America's Constitutional Tradition Before the Civil War challenges traditional American constitutional history, theory, and jurisprudence that sees today's constitutionalism as linked by an unbroken chain to the 1787 federal constitutional convention. American Sovereigns examines the idea that after the American Revolution, a collectivity - the people - would rule as the sovereign. Heated political controversies within the states and at the national level over what it meant that the people were the sovereign and how that collective sovereign could express its will were not resolved in 1776, in 1787, or prior to the Civil War. The idea of the people as the sovereign both unified and divided Americans in thinking about government and the basis of the Union. Today's constitutionalism is not a natural inheritance, but the product of choices Americans made between shifting understandings about themselves as a collective sovereign.
John Dinan, Department of Political Science, Wake Forest University finds the book "painstakingly researched and richly rewarding," in a review on H-Law.
And the blurbs:
"This is a superb and radical book, radical in the sense that it goes to the roots of the American constitutional tradition, pushes aside the crusty generations of constitution worship that have enshrined the federal constitution as a fixed, settled and static resolution of the nation's constitutional tradition and complicates matters enormously." Ronald Formisano, University of Kentucky, Lexington
"Professor Fritz's American Sovereigns tells a complicated story of constitutional development from the period of the Revolution to the Civil War. It is not a conventional account that takes its beginning from 1787 and a focus on the Federal Constitution; rather it offers an intimate account of change that reckons with the extraordinary role of the people as sovereigns. To be sure, Fritz discusses many questions that usually enter accounts of constitutions, but he gives these questions an unusual twist, and adds a fresh perspective through analysis of state constitutions, federal action with constitutional meanings; popular behavior in extraordinary events such as the Whiskey Rebellion and the Rhode Island crisis. In all of this intricate story, the people as sovereigns, a much contested proposition-as he demonstrates-serves to give his study its coherence. His book is not only a revisionist account; it is a beautifully written piece of history that illuminates a supremely important field." Robert Middlekauff, University of California, Berkeley
Posted by Mary L. Dudziak at 8:05 AM