Hirsch, The Soviets at Nuremberg: International Law, Propaganda, and the Making of the Postwar Order

Another new article in the American Historical Review is The Soviets at Nuremberg: International Law, Propaganda, and the Making of the Postwar Order by Francine Hirsch, Department of History, University of Wisconsin, Madison. AHR Editor Robert Schnieder describes it as follows: 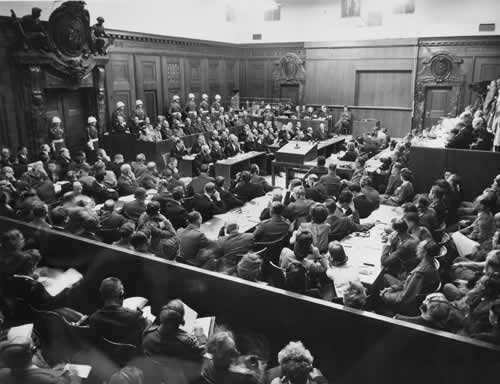 In “The Soviets at Nuremberg: International Law, Propaganda, and the Making of the Postwar Order,” Francine Hirsch investigates the role of the Soviet Union in the Nuremberg Trials of 1945-1946. She argues that Nuremberg is still seen through the distorting lens of the Cold War, suggesting that it is high time for a new narrative of the trials that gives a full accounting of the role of the Soviet Union. Hirsch evaluates the contributions that the USSR and its legal experts made to the jurisprudence of the trials. She also looks at the efforts of the Soviet Union's secret Commission for Directing the Nuremberg Trials to influence the course and outcome of the trials-and to affect the postwar moment in general. She argues that Nuremberg became one of the first fronts of postwar competition between the USSR and its former wartime allies-a competition in which the USSR did not fare well. The United States proved far more adept at shaping the trials and using them to advance a postwar agenda. It seized control of Nuremberg and made “the Nuremberg narrative” its own. In the end, Hirsch suggests that although Nuremberg was a failure for the USSR, it taught the Soviets important lessons that shaped their development as an international power.
Posted by Mary L. Dudziak at 7:55 AM