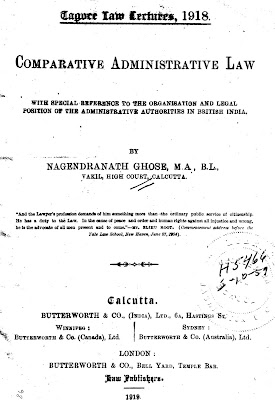 I shouldn't have been surprised. After all, when the historian Daniel Rodgers discussed his great book on the transnational world of early twentieth century reform, Atlantic Crossings (1998) at Georgetown some years ago, he readily agreed, when the point was made by Mari Matsuda, that American reformers were in conversations not only with Europeans but with counterparts around the world. I also knew of "Pacific Crossings" from a Fulbright semester spent studying New Zealand's labor courts and from Peter Coleman's excellent Progressivism and the World of Reform (1987).

Still, I didn't know what to make of a letter from Felix Frankfurter to the eminent corporation lawyer William D. Guthrie, written in December 1922, recommending a series of lectures by the Bengali lawyer Nagendranath Ghose as "the most helpful book in English" on comparative administrative law. I had assumed that the international trade in ideas about the administrative state was overwhelmingly a matter of European imports by American reformers intent on building autonomous bureaucracies. Yet, upon examination, Ghose's Comparative Administrative Law (1919) turned out to be an imposingly learned work that ransacked ancient, medieval, and modern history in search of constraints on official discretion. What was there in this that spoke to Frankfurter so acutely? 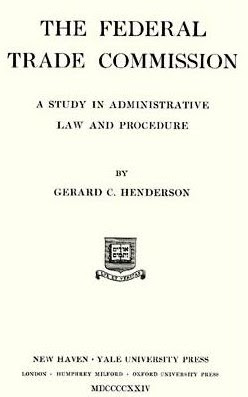 put the matter aside until earlier this year, when I found a letter from Ghose, written from Calcutta in 1925, in the papers of the Commonwealth Fund acknowledging the gift of a Fund-sponsored book, Gerard Henderson's Federal Trade Commission (1924). Ghose thanked Ernst Freund, the American-born, German-educated scholar who chaired the Fund's project on administrative law, for "remembering me, a humble worker in a field in which you and your colleagues in America have been pioneers." He explained why a book on an independent commission did not directly speak to his country's situation: "The transference of judicial powers from Courts of law to quasi-judicial administrative authorities has not been taking place in such rapid strides in India as in your country." In India, "the discretionary authority possessed by the executive" was "so much more absolute" than in the United States that it was unlikely to be exercised "in a judicial spirit." Ghose explained that Comparative Administrative Law was his call for "the early introduction in India of some form of administrative law to qualify and temper the exercise of this absolute discretionary authority." And by administrative law he meant, as the American Frank Goodnow did, the "self-control" of administrators through a body of internally generated rules that respected both efficiency and "citizens' rights."

I'm afraid that some desultory web browsing has not done much to widen the rather severe limits of my knowledge of Ghose's place in Indian history; I welcome comments from the better informed. I do know that Ghose was a scholar of Indian literature, a barrister (called to the bar by the Middle Temple, according to the Law Times of July 1, 1876) and an important figure in the early revolutionary movement. (In a letter to Felix Frankfurter in 1925, Ghose called India "a subject people beginning to chafe at its bonds.")

What interests me most about Ghose is the perspective he and his treatise throw on debates over administrative discretion in the early twentieth-century United States. View those debates in an exclusively national frame, and you might think that only trial lawyers, business leaders and other conservative figures attacked broad grants of discretionary power to administrators and that progressives uniformly defended them--excepting only the deportations of the Palmer Raids of 1919-20. A historian, alarmed by the excesses of the post-9/11 national security state and in search for a like-minded precursor, might well give up before discovering an American reformer who fully appreciated the potential danger to individual liberty of the administrative state. Where, a historian might ask, was the American counterpart to Harold Laski? Is the rehabilitation of Charles Evans Hughes, George Sutherland, or, heaven help us, James Montgomery Beck really the best we can do?

Ghose's deployment of administrative law against the British imperial officialdom suggests the possibility that reformers might have attempted to use administrative law (in Goodnow's and Ghose's sense) in analogous ways against the administrators of America's empire. (Felix Frankfurter's work as the chief legal officer in the Bureau of Insular Affairs during William Howard Taft's administration would be an obvious place to look.) More generally, Ghose's example suggests that an American reformer with something like the Bengali barrister's close-up view of the repressive capacities of foreign bureaucracies might have regarded the spread of autonomous bureaucracies in the United States with great alarm. In a work-in-progress I argue that Ernst Freund was one such reformer.
Posted by Dan Ernst at 11:00 PM