HABITS OF EMPIRE: A History of American Expansion by Walter Nugent (Kn 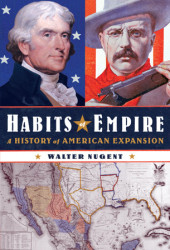 opf) is reviewed today in the Washington Post. Michael Grunwald find it a "generally scrupulous chronicle of American territorial expansion," but raises questions.

Nugent argues that the story of American imperialism is really one continuous story of expansion divided into three phases stretching from the end of the Revolution to the misadventures of the Bush Administration: the "continental empire," the "offshore empire" and the "global or virtual empire." But those are three very different stories; the second is relatively unimportant, and the third is not really about empire. Not all imperialism is created equal, and not all imperiousness is imperialism. 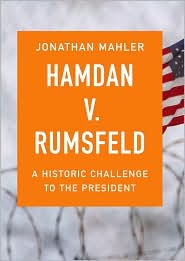 ahler, The Challenge: Hamdan v. Rumsfeld and the Fight over Presidential Power (Farrar, Straus and Giroux), gets a breezy, unenlightening review in the New York Times by Bryan Burrough. Seth Lipsky channels Anthony Lewis in a breathless review of Mahler entitled "Hamdan's Trumpet" in the New York Sun. Burrough would only recommend the book to lawyers, but Lipsky finds it "a riveting read." For Lipsky,

Mr. Mahler's narration is neither an anti-war tome, accusatory opus, nor political polemic. Rather it is a reaffirmation — a celebration even — of America's constitutional government, in which a doughty naval officer and immigrant constitutional enthusiast could, in the midst of a war, sue the commander in chief on behalf of a low-ranking enemy detained in a cell at the edge of America's jurisdiction, and best the entire federal legal apparatus. Even for those who don't agree with the decision in Hamdan, the book will be a reminder of justice's grandeur in our country.

Descent into Chaos: The United States and the Failure of Nation Building in 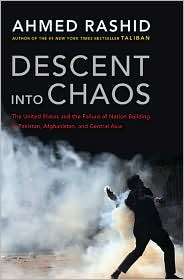 Pakistan, Afghanistan, and Central Asia by Ahmed Rashid (Viking) is reviewed in the San Francisco Chronicle. Steve Kettmann writes: "If you have had trouble making sense of the ever-gloomier headlines from Afghanistan, where a single attack in mid-July killed nine Americans and monthly U.S. death tolls are now higher than in Iraq, because of the resurgence of the Taliban, Ahmed Rashid's new study of the badly botched U.S. campaign in the area ought to be required reading." Raymond Bonner's New York Times review is a commentary on American policy in the region.

The Way of the World: A Story of Truth and Hope in an Age of Extremism by Ron Suskind is reviewed for the Los Angeles Times by Tim Rutten. The book takes up the Bush Administra

tion and the war on terror. Because of Suskind's past work, Rutten writes, "a reader comes...to 'The Way of the World: A Story of Truth 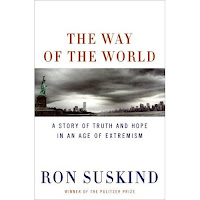 and Hope in an Age of Extremism' with high expectations. One is likely to get up, however, feeling frustrated, confused and in need of further reassurance from the author as to the substance of some of the book's most serious allegations."
Finally, MY GUANTÁNAMO DIARY: The Detainees and the Stories They Told Me (Public Affairs) by Mahvish Rukhsana Khan, an interpreter who worked with detainees is reviewed by Jeffrey Rosen in the New York Times.
Posted by Mary L. Dudziak at 8:46 AM