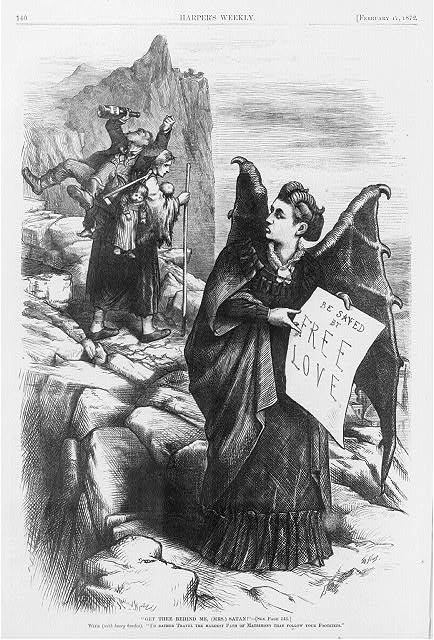 "Victoria & Frederick for President" was one of the plays showing in the New York International Fringe Festival (hosted by the New School for Drama) earlier this month. A local reviewer (here) called the show "informative if slightly uneven," but for legal historians and those who love them (I'm in the latter category), it was a show worth seeing.
One of the first books I ever read about Victoria Woodhull was Emanie Sachs' 1928 book, The Terrible Siren. Woodhull herself had a flair for the dramatic -- she declared herself a candidate for President of the United States in 1872, with Frederick Douglass as her running mate. The problem, of course, was that she didn't ask Douglass' permission ahead of time, and Douglass supported incumbent Ulysses S. Grant. Details...details....
This show wasn't the best piece of theater I've seen in a while, but it was very entertaining.
Image credit: Library of Congress. Thomas Nast, 1872. "Get thee behind me, (Mrs.) Satan!" Wife burdened by children and husband repudiates Victoria Woodhull's "free love" philosophy.
Posted by Bridget Crawford at 9:33 PM