Brewer on Why America Fights, Sunstein on Rumors, and more

WHY AMERICA FIGHTS: Patriotism and War Propaganda From the P 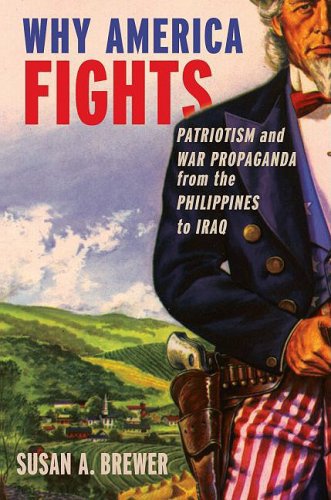 hilippines to Iraq by Susan A. Brewer is reviewed this weekend in the Washington Post. Colman McCarthy writes:

Brewer examines the narratives of six military efforts: the Philippine War, World War I, World War II, the Korean War, the Vietnam War and the Iraq War. Under a succession of presidents -- McKinley, Wilson, Roosevelt, Truman, Kennedy, Johnson, Nixon and George W. Bush -- American involvement was enshrined as humanitarian and the enemy demonized as barbaric. Whether the United States went to the Philippines to aid what William McKinley called our "little brown brothers" or to Iraq for what Bush called "a divine mission" or to extend Madeleine Albright's credo that America is "the indispensable nation. We stand tall. We see further into the future than other countries," Americans suffered few civilian casualties and saw other lands ravaged, not their own. With presidents trying to persuade -- not educate -- the public, Brewer writes that a "propaganda campaign seeks to disguise a paradoxical message: war is not a time for citizens to have an informed debate and make up their own minds even as they fight in the name of freedom to do just that."

Brewer's scholarship on the manipulation of public opinion places her in the company of Noam Chomsky, James Loewen, Michael True, Howard Zinn and other historians or social analysts of skeptical bent. Like them, she scours the record to counter the historical amnesia of the public. She documents how presidents at war portrayed themselves as travelers on the high road to peace and justice, not the low road to battle and dystopia: "Throughout the twentieth century, American leaders presented war aims dedicated to the spread of democracy and freedom rather than the expansion of U.S. power."

Continue reading here. Brewer discusses her book on Concurring Opinions.
Cass Sunstein's short new book, ON RUMORS: How Falsehoods Spread, Why We Believe Them, What Can Be Done is listed under psychology on washingtonpost.com. Though the WP review is not clear on what the law angle in this book might be, from the press book description, it appears that Sunstein makes an argument that is resonant with 1st amendment concerns. Those spreading rumors know that "the presumed correctives—publishing balanced information, issuing corrections, and trusting to the marketplace of ideas—do not always work." Anthony Lewis suggests in a blurb that Sunstein "convincingly shows that the constitutional marketplace of ideas does not solve the problem."
Ralph Luker notes: