Habeas Corpus, the 1970s, Mrs. Dred Scott, and more in the book pages

Habeas Corpus: From England to Empire by Paul D. Halliday is reviewed by Adrian Vermeule for the New Republic. Vermeule writes: 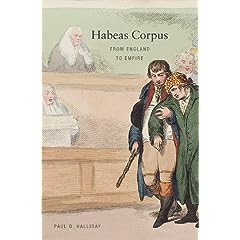 After the first phase of Paul Halliday’s superb history of habeas corpus, circa 1615, the judges of King’s Bench—the highest ordinary court—are riding high, using the Great Writ to consolidate their control over the bewildering myriad of lower English courts, administrative bodies, and special jurisdictions. As the book nears its close, circa 1815, the judges have lost control of habeas and of law’s subjects, and are increasingly subservient to an increasingly imperial state. How did this happen? Part legal drama, part subtle causal analysis, this book proves that a gripping history of a legal writ is no contradiction in terms. 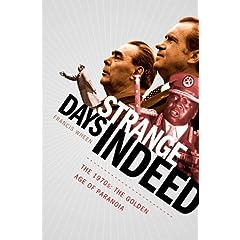 DEED: The 1970s: The Golden Age of Paranoia by Francis Wheen is reviewed in the Washington Post. "Some historians believe in the great man theory of history," writes Peter Carlson. "Not Francis Wheen. In 'Strange Days Indeed,' Wheen advances what might be called the 'crazy man theory of history.' And it makes perfect sense because he's writing about the 1970s, when world leaders exhibited astonishing levels of lunacy."

Mrs. Dred Scott: A Life on Slavery's Frontier by Lea VanderVeld is reviewed at Books and Culture. "What eminent legal scholar Lea VanderVelde does in her exhaustively sourced treatment," writes Amos N

. Jones, "is shed light on the famous Supreme Court decision's principal from the perspective of the proverbial great woman behind the great man, a woman invisible on the legal complaint's face but transformative in her insistence on achieving her freedom." Hat tip to Ralph Luker.

Martha C. Nussbaum discusses her new book, From Disgust to Humanity: Sexual Orientation and Constitutional Law, at The Nation.

And for you library lovers, THIS BOOK IS OVERDUE: How Librarians and Cybrarians Can Save Us All by Marilyn Johnson is reviewed in the New York Times.
Posted by Mary L. Dudziak at 5:08 AM