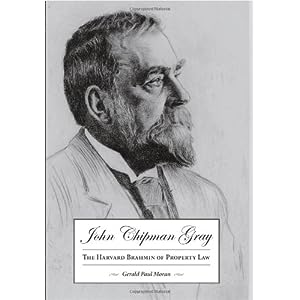 First, although Moran notes that his book should not be described as a “definitive biography” of Gray (p.8), the work nevertheless chronicles the life of an important figure in American legal history. Second, and related, Moran attempts to demonstrate that Gray’s most notable contribution to the field of property law – his synthesis of the abstruse Rule Against Perpetuities (RAP) – is, in effect, a personification of his own character. In Moran’s words, “the focus of this study is on the symbiotic relationship of a man and his rule of law. They are inseparable” (p.17). The succeeding pages of Moran’s narrative set out to illustrate that proposition.

In addition to detailed discussions of Gray's scholarship, Curry notes, the book covers Boston’s Brahmin community (and its reaction to Gray's father's bankruptcy), Gray's relationship with his half-brother Horace Gray (the Supreme Court Justice), the founding of the elite firm Ropes & Gray, and Gray's experience on the law faculty at Harvard in the Langdellian era.

The full review is here.
Posted by Karen Tani at 7:00 AM