War in the Book Reviews

The nature of war is the subject of a number of book reviews during the past week. Newspaper reviews focus especially on one new book: TO END ALL WARS: A Story of Loyalty and Rebellion, 1914-1918, by Adam Hochschild.  "In his previous works, on subjects as diverse as the Belgian Congo and the victims of Stalinism, Hochschild has distinguished himself as a historian 'from below,' as it were, or from the viewpoint of the victims," writes Christopher Hitchens in the New York Times, in the best of three reviews.   In this "moving and important book," Hochshild "stays loyal to this method in 'To End All Wars,' concentrating on the appalling losses suffered by the rank and file and the extraordinary courage of those who decided that the war was not a just one."

The accounts of Hochshild's book all raise the question of whether war produces war, and, in this example, whether "the war to end all wars," as Woodrow Wilson memorably put it, made Word War II inevitable.  In Hitchens on Hochshild:


We read these stirring yet wrenching accounts, of soldiers setting off to battle accompanied by cheers, and shudder because we know what they do not. We know what is coming, in other words....What is really coming, stepping jackbooted over the poisoned ruins of civilized Europe, is the pornographic figure of the Nazi....[Hochshild] approaches a truly arresting realization: Nazism can perhaps be avoided, but only on condition that German militarism is not too heavily defeated on the battlefield.

While the point that World War I's resolution paved the way to World War II has been made by others, Hochshild finds American complicity in the military role in this outcome:


If General Pershing’s fresh and plucky troops had not reached the scene in the closing stages of the bloodbath, universal exhaustion would almost certainly have compelled an earlier armistice, on less savage terms. Without President Wilson’s intervention, the incensed and traumatized French would never have been able to impose terms of humiliation on Germany; the very terms that Hitler was to reverse, by such relentless means, a matter of two decades later.

Read the rest here.  Hochshild is also reviewed in the Washington Post and the Boston Globe.

The nature of war, and the difficulties of historical reconstruction, take a different focus in Simon Akram's review of War and the Crisis of Youth in Sierra Leone by Krijn Peters In The New Republic/The Book.  Akram sets the book in the context of a conflict over the meaning of the war in Sierra Leone. 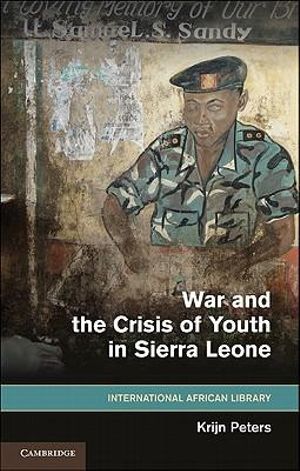 The point of departure for the debate was Robert Kaplan’s article ‘The Coming Anarchy,’ which appeared in The Atlantic in 1994. It characterized the war as a kind of intrinsic, unfathomable African mayhem, with Sierra Leone “beyond salvage.” A year after the Clinton administration got its fingers burned in Mogadishu, the piece attracted much attention. The Department of State even faxed a copy to every American embassy in the world. Subsequently a succession of other writers vigorously disputed Kaplan’s ideas, variously claiming that the atrocities committed by the Revolutionary United Front reflected the ‘lumpen’ or urban-criminal character of its members, or that the brutality of the war was far from mindless but instead a reflection of harsh economic realities, notably the attraction of Sierra Leone’s fabled diamond deposits.

This new book "is the latest skirmish in this dispute.... In Peters’s reading, the violence that the [Revolutionary United Front] would go on to perpetrate was a departure from an initially legitimate rebellion."  Ultimately, Akram finds writing on this war to be unsatisfactory.  "Generally the literary treatment of the war has been divided between bang-bang banality and footnoted technicality." Akram places Peters in the latter category, which is in some ways a journalist's predictable criticism of an academic for being, well, an academic.  For Akram, it appears as if the academic's effort to understand Sierra Leone becomes an act of obfuscation.


Pages of footnotes referring to obscure journals cannot do justice to Sierra Leone’s horror. The conflict was tragic in a simple sense, but also in a Shakespearean way: a movement rose up against an utterly venal and corrupt regime, yet despite the nobility of their cause the attempted revolution descended into orgiastic violence. Such a story is better told by a sweeping work of narrative history, or in a broad slice of realist historical fiction. Its immeasurable pathos is buried and betrayed by the tepid furies of Africanist academic revisionism.

The rest is here.  Yet it seems that the horrors of war, in Sierra Leone or in the World War I trenches, makes academic work on the nature of 20th century warfare as essential as Akram finds it impossible.
Posted by Mary L. Dudziak at 11:17 AM