Winners' History? This Week in the Book Pages 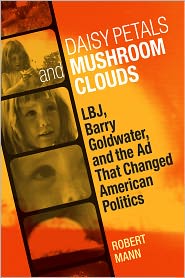 This week the Wall Street Journal reviews Daisy Petals and Mushroom Clouds: LBJ, Barry Goldwater, and the Ad That Changed American Politics (Louisiana State University Press), by journalism professor Robert Mann.  The title invokes the famous "Peace Little Girl (Daisy)" television advertisement, from the 1964 presidential election. ( If you don't know it, you can watch it here, courtesy of the Museum of the Moving Image.)  Here's more:


Mr. Mann describes the ad and its creation in brilliant detail. He finds the sound man who pioneered both the use of real children's voices and the disembodied voice of a countdown. The ad itself, is a masterpiece of suspense. Never does it mention Goldwater. Never does it claim a candidate will start a nuclear war. But it instantly ended Goldwater's campaign.

In the pages of the Nation, Ross Posnock reviews American Nietzsche: A History of an Icon and His Ideas (University of Chicago Press), by Jennifer Ratner-Rosenhagen.  Here's a taste:

With vigor and intelligence American Nietzsche covers a great deal of ground—more than a century of response to the philosopher, from music critic James Huneker and philosopher Josiah Royce to feminist writers Eve Sedgwick and Judith Butler. The book concludes with a consideration of how three influential thinkers—Harold Bloom, Richard Rorty and Stanley Cavell—relied on Nietzsche as a way to recover “expressions of antifoundationalism on American native grounds.” Reading Nietzsche brought Bloom and Cavell back to Emerson, and helped Rorty reclaim the pragmatists William James and John Dewey. In each case, Nietzsche was the indispensable lens through which differences were clarified and understanding sharpened.

The review also makes interesting points about the uses and limits of histories of "reception."

Memoirs of the Bush Administration are big news this week.  In the New York Times Sunday Book Review, Alan Brinkley reviews Known and Unknown: A Memoir (forthcoming, Sentinel Trade), by Donald Rumsfeld, and In My Time: A Personal and Political Memoir (Threshold Editions), by Dick Cheney with Liz Cheney.  Here's Brinkley's take:


Political memoirs are normally unsurprising, but these two books are unusual for their defensiveness and occasional combativeness in the face of the broad popular contempt so many people expressed while Rumsfeld and Cheney were in office. The two men present similar arguments. Both rarely confess to making mistakes, though they often write sharply about others who have. But the most important question that these books raise is the one of their credibility.

The Los Angeles Times, meanwhile, gives top billing to former Secretary of State Condoleeza Rice and her new memoir No Higher Honor. According to the review, it is "an exhausting," and sometimes "engaging," "walk in Rice's shoes." (Another review, from the WSJ, is here.)

A new issue of the New York Review of Books is out.  LHB readers will want to check out Brent Staples's review of The Invisible Line: Three American Families and the Secret Journey from Black to White (Penguin), by Daniel J. Sharfstein (subscribers only, here) and Anthony Grafton's review of eight recent books on our universities and why they are failing (open access, here).

This week the New Republic: The Book covers two works of history: Carthage Must Be Destroyed: The Rise and Fall of an Ancient Civilization (Viking), by Richard Miles, and Hitler’s Hangman: The Life of Heydrich (Yale University Press), by Robert Gerwarth. The former, according to the review, is an attempt to wrest the real Carthage from the clutches of winners' history.  The latter, writes reviewer István Deák, is "a thoroughly documented, scholarly, and eminently readable account" of perhaps "the cruelest among the many cruel National Socialist leaders." (Timothy Snyder also reviewed the book this week, here, for the Wall Street Journal.)

The Chronicle of Higher Education reviews Galileo's Muse: Renaissance Mathematics and the Arts (Harvard University Press), by physicist and mathematician Mark A. Peterson.  According to the review (subscribers only), the book urges historians of science to recognize "the extent to which the mathematics of Renaissance arts, as much as of Renaissance sciences, drove the emergence of modern science."

Also in this week's book pages: much more on politics, family, and war.