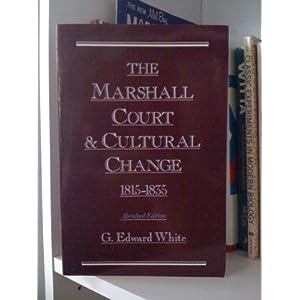 The exchange between Ted White and Al Brophy on The Marshall Court and Cultural Change has given rise to yet more questions and comments. A frequent blog commentator, Shag from Brookline, posted a question for Ted White in the comments. Shag wondered:

Q: Does the Taney Court's Charles River Bridge case decision square with originalism? (I understand that some scholars consider that CJ Taney's opinion in Dred Scott was an early Court example of originalism.)

A: I can't think of any scholars who have taken the position (in print) that Taney's opinion in the Charles River Bridge case was an "early example of orginalism." Portions of Taney's opinion in Dred Scott might qualify, at least insofar as he tried to ground the conclusion that African-American slaves or their descendants could not bring suit in the federal courts because African-Americans were thought of as holding "a degraded status" during the framing period, so that the privileges and immunities of "citizens of the United States" in Article IV of the Constitution did not apply to them. But the Charles River Bridge case, by the time it was eventually decided by the Court, was about whether the Contracts Clause of the Constitution implicitly contained the common law principle that a legislature could not take property from A and give it to B without compensation. That was not an "originalist" reading of the Contracts Clause; it was a reading that had been supplied by some early nineteenth-century Contracts Clause decisions of the Court and some commentators, notably Joseph Story, and it rested on something like natural law, "first principles of free republican governments." Taney's opinion rejected that reading, not because of the "original understanding" of the Contracts Clause but on two other grounds: first, contracts should be strictly construed (offered as a common law principle of interpretation), and, second, "improvements" in transportation would be impeded if the franchisees of legislatures could prevent any subsequent competition in a transportation sector, even if such competition was welcomed by subsequent legislatures allegedly representing the public as a whole.
Posted by Anonymous at 6:00 AM