Immigrants and Absconding Embezzlers in the Gilded Age and Progressive Era 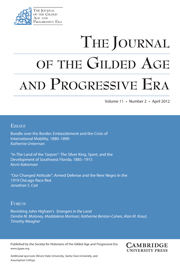 Just in time for the Arizona immigration case, the latest (gated) issue of the Journal of the Gilded Age and Progressive Era includes a symposium on John Higham’s Strangers in the Land.  My Georgetown colleague Katherine Benton-Cohen views the book from the vantage of Western History.

Also in the issue is another installment of the work of Katherine Unterman, Texas A&M, on the history of extradition.  This one is Boodle over the Border: Embezzlement and the Crisis of International Mobility, 1880–1890:


Roughly 2,000 American fugitives fled to Canada in the 1880s—mostly clerks, cashiers, and bank tellers charged with embezzlement. This article argues that these “boodlers,” as they were popularly called, were symptomatic of a late-nineteenth-century crisis of mobility. Embezzlement was a function of new kinds of mobility: migration to cities, the rise of an upwardly mobile middle class, the fungibility of greenbacks, and the growth of international transportation networks. The boodlers were some of the earliest white-collar criminals. By focusing on their unexplored story, this article contributes to the growing literature that presents the clerk as an important figure in nineteenth-century labor history. Still, the boodlers also had a more unexpected impact on the evolution of the United States' international borders, both in the popular imagination and in actual surveillance and law enforcement techniques. Through the figure of the boodler, this article examines the links between the growth of capitalism and the development of the United States–Canada border in the late nineteenth century.

Were the Gilded Age and Progressive Era coterminous? What were the distinctions? Since the Journal is "gated," I don't have an idea of why it features both. Wikipedia provides some help. There are of course presently openly progressives, sometimes labeled liberals. But are there presently gilded ageists, perhaps in the form of the .1%?

They were consecutive. According to the Journal's website: "The Journal of the Gilded Age and Progressive Era is a scholarly, peer-reviewed journal published quarterly by the Society for Historians of the Gilded Age and Progressive Era (SHGAPE). The journal contains original essays and reviews scholarly books on all aspects of U.S. history for the time period from 1865 through 1920." I'm not exactly sure where one would date the passage from the one period into the other. The recovery from the depression of the 1890s is a conventional date--say, 1898.

Dan,
Thanks for the response. Interwoven is the Lochner Era, which might be described as an effort to rehabilitate the Gilded Age. And it seems the Roaring Twenties may have been somewhat the result, leading to the Great Depression and in turn to the New Deal's progressive period. Jack Balkin has recently suggested that currently we are in a "Second Gilded Age." So perhaps recycling of the Gilded Age and Progressive Era may be chronic historically.