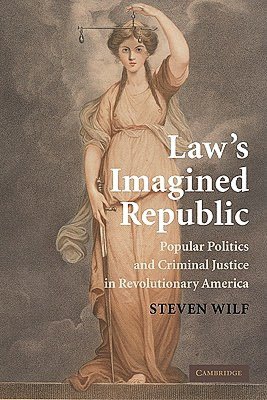 In the latest issue of Common-place, you'll find a review of Law's Imagined Republic: Popular Politics and Criminal Justice in Revolutionary America (Cambridge University Press), by Steven Wilf. Here's an excerpt from the review, by Michael McDonnell (University of Sydney, Australia).


In this lively little book, Steven Wilf, the Joel Barlow Professor of Law at the University of Connecticut, encourages Americans to re-imagine a time when legal discourse was not just confined to the courts. Since the nineteenth century, most ideas about the legal legacy of the American Revolution have put the Constitution front and center, privileged the story of the rise of court-based jurisprudence, and especially the importance of constitutional interpretation through judicial review. The Revolution, the story goes, created a nation dedicated to the rule of law. Yet in a provocative cultural and literary analysis, Wilf compels us to look closely at the proliferation of "law talk" across the colonies in the era of the American Revolution—a legal language that was both elite and popular, spanned different forms of expression from words to rituals, and drew on fictive and real ideas of law. And, because this law talk emerged simultaneously with the imperial crisis, a "revolutionary legal language became intimately intertwined with politics" and transformed America's legal institutions. While we may now remember a less contentious outcome, Wilf makes a compelling case that we would do well to recall the "untidy" origins of American law in an era when the Constitution is America's "most important export" (195).