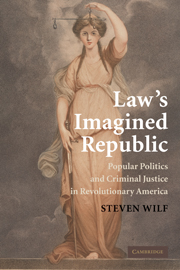 t been published by Cambridge University Press. It is part of the series Cambridge Historical Studies in American Law and Society, edited by Christopher Tomlins. Here's the book description:

Law's Imagined Republic shows how the American Revolution was marked by the rapid proliferation of law talk across the colonies. This legal language was both elite and popular, spanned different forms of expression from words to rituals, and included simultaneously real and imagined law. Since it was employed to mobilize resistance against England, the proliferation of revolutionary legal language became intimately intertwined with politics. Drawing on a wealth of material from criminal cases, Steven Wilf reconstructs the intertextual ways Americans from the 1760s through the 1790s read law: reading one case against another and often self-consciously comparing transatlantic legal systems as they thought about how they might construct their own legal system in a new republic. What transformed extraordinary tales of crime into a political forum? How did different ways of reading or speaking about law shape our legal origins? And, ultimately, how might excavating innovative approaches to law in this formative period, which were constructed in the street as well as in the courtroom, alter our usual understanding of contemporary American legal institutions? Law's Imagined Republic tells the story of the untidy beginnings of American law.

‘Wilf has unearthed and brought to life an entire underground culture of popular lawmaking in revolutionary America: crowds, juries, defendants, townsmen, and artisans, who ‘imagined’ the contours of a dramatically different legal system from the one they were used to, who made law in their own popular idiom and fashioned it to their own purposes. This is brilliant, original legal-cultural history, told with lucidity and grace.’ Robert Gordon, Yale University

‘Law’s Imagined Republic is a brilliant and original portrayal of the emergence of law as the focus of struggles over legitimacy during the American revolutionary era. In Steven Wilf’s hands, however, both the content and the rituals of law are being constantly contested by a mobilized populous ready to imagine different legal norms. Drawing on the rich materials of contemporary criminal trials and elaborate popular commentary through newspapers, pamphlets, and ballads, Wilf shows how legal discourse comes to occupy a central place in the American cultural imagination.’ Morton J. Horwitz, Harvard Law School

‘Steven Wilf’s Law’s Imagined Republic is a highly provocative, inventive, and fascinating analysis of the importance of the popular discourse and practice of law-making and law-interpreting during the American Revolution. His account of the centrality of popular contributions to the culture of the law in America is thoughtful and compelling, and his efforts to bridge law and literature fresh and enjoyable.’ Michael Meranze, University of California, Los Angeles