Conversations about the legal implications of the BP oil spill, combined with Dan's post on environmental law aficionado Richard Lazarus, prompted me to wonder about the subfield of environmental legal history. I was aware of James Willard Hurst's famous study of the Wisconsin lumber industry (including its environmental consequences), and I had read some historical work on riparian rights and environmental nuisances, but I was sure there must be more out there. Some quick searching turned up lots of new scholarship:

From Karl Boyd Brooks (University of Kansas) comes Before Earth Day: The Origins of American Environmental Law, 1945-1970 (2009). It is a revisionist history of environmental law and a challenge to accounts that have privileged the developments of the past forty years over what came before. Here's a summary from the publisher's website:

Surveying the landscape from the end of World War II to Earth Day 1970, Brooks traces a dramatic shift in Americans’ relationship to the environment and the emergence of new environmental statutes. He takes readers into legislative hearing rooms, lawyers’ conferences, and administrators’ offices to describe how Americans forged a new body of law that reflected their hopes for rescuing the land from air pollution, deforestation, and other potential threats. For while previous law had treated nature as a commodity, more and more Americans had come to see it as a national treasure worth preserving.

Keith Hirokawa offers a thoughtful review in the March 2010 issue of Reviews in American History.Another scholar urging a reconsideration of conventional wisdom is Ben Pontin (Bristol Law School). In 2007, he published an article titled "Integrated Pollution Control in Victorian Britain: Rethinking Progress within the History of Environmental Law." Here's the first paragraph:

This article explores overlooked historical material relating to Victorian-era experimentation with the quintessentially modern regulatory concept of integrated pollution control (IPC), and the wider challenges that this poses for current understanding of the historical development of environmental law in Britain and countries influenced by it. The focus is on the Alkali Acts 1863-1906, which regulated large-scale industrial pollution within the World's first industrial nation for over two centuries of dramatic change, prior to the enactment of the IPC regime contained in Part I of Environmental Protection Act 1990 and subsequent EU-inspired reforms. No one could seriously dispute that existing industrial pollution control provisions represent, on paper at least, a considerable advance on the ageing Alkali Act regime, contributing in particular to integration at a variety of noteworthy levels. What is less clear is how groundbreaking recent regulatory developments in this field are when viewed from a broader historical perspective. In tracing IPC back to Victorian-era legislation enacted between 1863 and 1881 addressed to the problem of chemical industry pollution, the analysis below challenges the modernity of this leading regulatory concept, highlighting levels of sophistication in environmental law and policy during the early stages of industrialisation which many scholars today around the world would consider inconceivable. What were the characteristics of ‘Victorian IPC’? Who were the main protagonists responsible for its introduction? And, crucially, why was early innovation not sustained (to the point that it became lost to the architects of IPC today)?

In the October 2009 issue of Environmental History, you can find an article by Darren Speece on the legal fight over the California redwoods, 1970-1996. Here's the abstract:

The California redwoods have long been the subject of conflict, but after 1970 the fights were transformed when citizens leveraged the courts to challenge California's corporatist timber regime, with its focus on timber production. The history of the legal campaign highlights the need to focus on local aspects of modern environmental history. Unlike the typical narrative about the nationalization and professionalization of modern environmental politics, the redwood battles reveal persistent insurgence, intense local activism, and the breakdown of a corporatist, production-focused governance tradition. The history of the legal fights over the redwoods also points to the national consequences, most of them unintended, of the local activism. The current literature prioritizes litigation efforts that enforced and clarified particular aspects of the modern environmental protection regime, not litigation that transformed governance. This essay focuses on the eight most important cases in the movement to reform California forestry governance. Because the local citizens' movement set its sights on the transformation of institutions, increased regulation of private property, and giant redwoods, it led to, and was part of, one of the most important environmental battles of the late twentieth century.

Another activism-oriented contribution is Eileen McGurty's Transforming Environmentalism: Warren County, PCBs, and the Origins of the Environmental Justice Movement (2007). This description comes from the publisher:

Contemporary public policy circles are quick to acknowledge that environmental factors contribute to ill health and pose a particular threat to poor and minority communities. But public officials rarely examined the distribution of environmental hazards such as polluted air and contaminated water. In the 1980s, as toxic waste facilities proliferated, the environmental justice movement demanded that impoverished communities no longer be burdened by excessive environmental risks.

In Transforming Environmentalism, Eileen McGurty explores a moment central to the emergence of the environmental justice movement. In 1978, residents of predominantly African American Warren County, North Carolina, were horrified to learn that the state planned to build a landfill in their county to hold forty thousand cubic yards of soil that was contaminated with PCBs from illegal dumping. They responded to the state's plans with a four-year resistance, ending in a month of protests with over 500 arrests from civil disobedience and disruptive actions.

McGurty traces the evolving approaches that residents took to contest "environmental racism" in their community and shows how activism in Warren County spurred greater political debate and became a model for communities across the nation. Transforming Environmentalism explores how the specific circumstances of the Warren County events shaped the formation of the environmental justice movement and influenced contemporary environmentalism.

You can find a review here. For a blend of environmental history and judicial biography, see The Environmental Justice: William O. Douglas and American Conservation (2009), by Adam Sowards (University of Idaho). Here's a summary from a recent review: Douglas's ideology about nature evolved from his time as a boy in the Cascade Mountains to his retirement from the Supreme Court in 1975. Over the course of several decades, Douglas moved from an aesthetic appreciation of nature, to combating development and pollution and connecting social justice issues with environmental ones. Certainly, many of Douglas's views were hardly novel to the conservation movement. Sowards makes the important point that Douglas's position, however, yielded an authority many environmentalists lacked. In addition, he vocally advocated for a higher level of democracy with the decision-making process with natural areas, something later incorporated into law.

Sowards also investigates the impact of Douglas's environmental views on his written opinions as a justice of the Supreme Court. Overall, Sowards states that Douglas certainly raised awareness with his writings and activism, but his legacy as a justice is mixed. His opinions reflected his overall views of nature and the importance of public participation, but dissents rarely set legal precedent. Interestingly, and more vividly than through his activism or writings, Douglas's legal opinions show his ability to connect social and environmental ills, foreshadowing the environmental justice movement.

Other work in this area blends legal history and labor history. For an example, see "Disasters, Railway Workers, and the Law in Avalanche Country, 1880-1910," by Diana DiStefano (Bucknell University). According to the abstract this essay

examines how skilled Mountain West railway workers in Canada and the United States incorporated environmental problems into their work culture. Through experience they developed methods of predicting snow slides and embraced customs that compelled them to work even under the most dangerous conditions. These informal practices, rather than written work rules, guided the decisions they made to offset risk for both their co-workers and train passengers. I argue that living and working in Avalanche Country meant railway workers gained an intimate knowledge of their natural surroundings that clashed with accepted corporate and legal interpretations that saw slides as unforeseeable acts of God. Comparing three avalanche disasters in two countries provides persuasive evidence that occupation and experience influence notions of risk. Importantly, the significance of my argument lies in its refusal to see industrial workers as detached from nature and for what it suggests about workers in other places and occupations who also likely developed job-specific practices in response to environmental dangers.

My most surprising find was The Culture of Flushing: A Social and Legal History of Sewage (2007), by Jamie Benidickson (University of Ottawa) . This summary comes from a recent review: 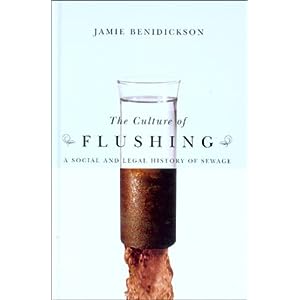 Rarely have legal histories peered into the latrines of the 19th and 20th century. Fortunately, the view from within Jamie Benidickson’s book, THE CULTURE OF FLUSHING: A SOCIAL AND LEGAL HISTORY OF SEWAGE, is informative and quite comprehensive. A reader looking for a full examination of the social and legal history of sewage in Canada, the United States and the United Kingdom will find it in this volume. Benidickson moves through 200 years of sewage history by focusing on key developments in our attitude and treatment of sewage in major urban centers, including Toronto, New York, Chicago, and London. He chronicles the early history of neglect and the prevailing attitude of streams as “nature’s sewers” and how water came to become an acceptable medium for disposing urban and industrial waste. With clarity and insight, Benidickson traces the major court battles, and legislation culminating in the Clean Water Act of 1972. Each step in the murky legal and cultural history of waste disposal, including the legislative attempts, the arguments made in court, the judicial opinions issued at various stages of ongoing litigation is clearly summarized. The author also puts this legal history in the larger context of environmental degradation, national legislation, and changing cultural attitudes and norms of collective responsibility.

Last, I noticed that Douglas Harris (University of British Columbia) teaches an entire course on Environmental Legal History. The diverse set of readings includes excerpts from James Scott, Seeing Like a State; Carol Rose, Property and Persuasion; William Cronin, Changes in the Land; and - one of my favorite children's authors - Roald Dahl, Danny the Champion of the World. I'm sure that Harris and others know much more about the state of this subfield, so I encourage comments.

I'm not trained in legal studies but a book that I would recommend is Conservation and the Gospel of Efficiency by Samuel P. Hays. The author challenges progressive assertions that environmentalism was borne out of concern for social justice or aesthetics. Instead it was the convergence of interests of western land developers including miners, foresters, and utility operators who looked the Washington to provide capital for expansion and rules superseding provincial issues and technocratic and political elites who sought to use principles of applied science to guide resource use and development.

Hi Karen -- a great (and depressingly timely) post. For readers of this blog particularly (and anyone interested in environmental regulation/law), I would recommend Gerald Markowitz and David Rosner's Deceit and Denial: The Deadly Politics of Industrial Disease. The book uses internal corporate records unearthed during tort litigation to show how the lead and chemical industries suppressed information on health risks associated with their products and manufacturing process. In light of BP, it really underscores the folly of a voluntaristic approach to environmental policy.

The research has played a central role in subsequent ongoing cases in many states. Rosner has some interesting reflections in a recent article here: http://www.law.duke.edu/shell/cite.pl?72+Law+&+Contemp.+Probs.+137+(winter+2009)+pdf and at his and Markowitz's website: http://www.deceitanddenial.org Anyone who might expert witness (or whose work might be invoked in a courtroom) ought to read these accounts.

Other recent works in the field include writing by Noga Morag-Levine (http://www.law.msu.edu/faculty_staff/publications.php?prof=372), Betsy Mendelsohn's chapter in the Cambridge History of Law in America (http://www.cambridge.org/catalogue/catalogue.asp?isbn=9780521803076), and Paul Milazzo's book on Congress and clean water (http://www.kansaspress.ku.edu/milunl.html).
I also have a bunch of forthcoming publications, including this: http://ssrn.com/abstract=1506582.

For more on the history of environmental law, see environmentlawhistory.blogspot.com.