Brown, "Arming and Disarming: A History of Gun Control in Canada"

The University of Toronto Press has published "the first comprehensive history of gun control in Canada from the colonial period to the present": Arming and Disarming: A History of Gun Control in Canada, by R. Blake Brown (Saint Mary's University). Here's more, from the Press: 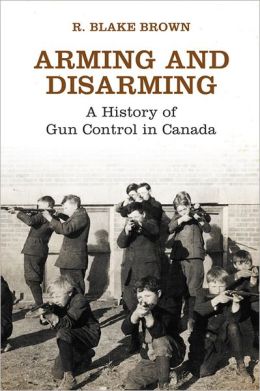 In this sweeping, immersive book, R. Blake Brown outlines efforts to regulate the use of guns by young people, punish the misuse of arms, impose licensing regimes, and create firearm registries. Brown also challenges many popular assumptions about Canadian history, suggesting that gun ownership was far from universal during much of the colonial period, and that many nineteenth century lawyers – including John A. Macdonald – believed in a limited right to bear arms.

Arming and Disarming provides a careful exploration of how social, economic, cultural, legal, and constitutional concerns shaped gun legislation and its implementation, as well as how these factors defined Canada’s historical and contemporary ‘gun culture.’


Chapter 1: “Every man has a right to the possession of his musket”: Regulating Firearms before Confederation

Chapter 2: “The government must disarm all the Indians”: Controlling Firearms from Confederation to the Late-Nineteenth Century

Chapter 3: “A rifle in the hands of every able-bodied man in the Dominion of Canada under proper auspices”: Arming Britons and Disarming Immigrants from the Late Nineteenth Century to the Great War

A review, from the Literary Review of Canada, is available here.

Hat tip: bookforum
Posted by Karen Tani at 12:30 AM