This past weekend at OAH I had the pleasure of commenting on the panel "Race and Law: New Directions in Southern Legal History," chaired by David Lieberman (UC Berkeley) and featuring papers by Sally Hadden (Western Michigan University), Charles Zelden (Nova Southeastern University), and Patricia Minter (Western Kentucky University). The scholarship presented was terrific, but the real star of the show was Hadden and Minter's new edited collection, Signposts. According to the Acknowledgements, the "volume originated in a conversation many years ago, in the early morning hours before a long day at the Organization of American Historians annual meeting." It was fun to see the two editors, many conversations and conferences later, celebrating the product of their collaboration. 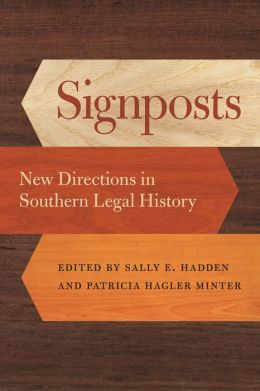 Here is a description of the book, from the University of Georgia Press website:


In Signposts, Sally E. Hadden and Patricia Hagler Minter have assembled seventeen essays, by both established and rising scholars, that showcase new directions in southern legal history across a wide range of topics, time periods, and locales. The essays will inspire today's scholars to dig even more deeply into the southern legal heritage, in much the same way that David Bodenhamer and James Ely's seminal 1984 work, Ambivalent Legacy, inspired an earlier generation to take up the study of southern legal history.

Contributors to Signposts explore a wide range of subjects related to southern constitutional and legal thought, including real and personal property, civil rights, higher education, gender, secession, reapportionment, prohibition, lynching, legal institutions such as the grand jury, and conflicts between bench and bar. A number of the essayists are concerned with transatlantic connections to southern law and with marginalized groups such as women and native peoples. Taken together, the essays in Signposts show us that understanding how law changes over time is essential to understanding the history of the South.


"Constitutional and legal history converge comfortably in this welcome rethinking of the southern legal heritage. Signposts is a milestone in the emergence of a more encompassing vision of the legal and constitutional history of the South."
—William M. Wiecek, author of The Birth of the Modern Constitution: The United States Supreme Court, 1941-1953

"This collection is truly first rate, offering essays that plow new ground or offer fresh perspectives on more familiar topics. While the individual essays are more than worth the price of admission, together they offer rich insights into the ways law shaped and was shaped by southern society. Hadden and Minter have done an enormous service to the field of legal history by bringing this outstanding group of authors together in a volume that underscores the vitality of southern legal history and sets an ambitious agenda for future scholarship. —Donald G. Nieman, coeditor of Local Matters: Race, Crime, and Justice in the Nineteenth-Century South

After the jump -- a table of contents. (I got a sneak peak through my OAH commenting gig):

“Using the Faculties Conceded to Her by Law”: Slavery, Law, and Agency in Spanish New Orleans, 1763–1803.
Jennifer M. Spear

Part II: Law and Society in the Long Nineteenth Century

The Material Conditions of Dependency: The Hidden History of Free Women’s Control of Property in the Early Nineteenth- Century South.
Laura F. Edwards

The World Made by Laws and the Laws Made by the World of the Old South.
Alfred L. Brophy

Strategic Litigation and the Death of Reconstruction.
Cynthia Nicoletti

A Place for Themselves in the Modern World: Southern Women and Alcohol in the Age of Prohibition, 1912–1933.
Lisa Lindquist Dorr

The Southern Roots of the Reapportionment Revolution.
Charles L. Zelden

Defending the Right to Discriminate: The Libertarian Challenge to the Civil Rights Movement.
Christopher W. Schmidt

Former guest blogger Chris Schmidt offered us a preview of his contribution earlier this year, here.
Posted by Karen Tani at 8:00 AM