On Monday we mentioned a recent release from the University of Toronto Press (Brown, Arming and Disarming). Here's another one: Barrington Walker, ed., The African Canadian Legal Odyssey: Historical Essays (2012). The Press offers this description: 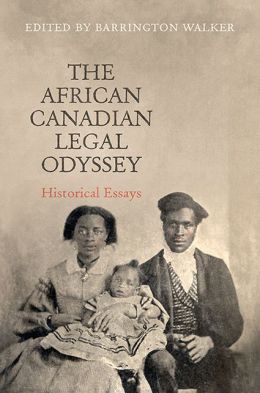 The African Canadian Legal Odyssey explores the history of African Canadians and the law from the era of slavery until the early twenty-first century. This collection demonstrates that the social history of Blacks in Canada has always been inextricably bound to questions of law, and that the role of the law in shaping Black life was often ambiguous and shifted over time.

Comprised of eleven engaging chapters, organized both thematically and chronologically, it includes a substantive introduction that provides a synthesis and overview of this complex history. This outstanding collection will appeal to both advanced specialists and undergraduate students and makes an important contribution to an emerging field of scholarly inquiry.

Check out the TOC after the jump:

Slavery, Race and the Burden of History

Reading through the TOC, I looked for references to the Underground Railroad through the northern states into Canada, but found none. I am interested in the history of US fugitive slaves escaping into Canada - as well as free Blacks who went there -and their lives there, their stories of their travails that brought them to Canada. Any help?