Symposium on Tomlins, "The State and the Unions"

Labor History recently published a symposium in honor of the twenty-fifth anniversary of The State and the Unions, by Christopher L. Tomlins (UC Irvine). The articles are available only to subscribers, but the introduction, by Craig Phelan, is open access, as are the abstracts. 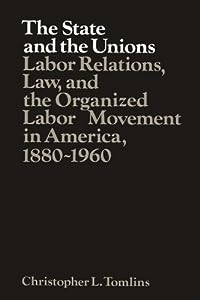 Here, for example, is the abstract for the contribution by Jean Christian Vinel (Université Paris Diderot) (whose book, The Employee, we mentioned earlier this week):


The thrust of this article is to review the evolution of the historiography of American labor law since the publication of Christopher Tomlins' widely celebrated The State and the Unions (1985). More than an isolated effort, Tomlins' critique of New Deal labor law was part of a broader analytical paradigm which should be called the ‘critical synthesis’. Dominating the field until the mid-1990s, the critical synthesis owed a part of its success to the crisis of labor history. Then, it gradually receded as labor unions continued their steep decline and historians of labor rekindled their faith in American liberalism and the Democratic Party. In analyzing the rise and fall of the critical synthesis, the article thus lays bare all the factors – scientific, social, and political – that contribute to the making and unmaking of analytical paradigms in the political history of labor. Finally, in doing so, the article places the debate on the Employee Free Choice Act in historical perspective.

Here is the abstract for Tomlins's response, titled "The State, the Unions, and the Critical Synthesis in Labor Law History: A 25-Year Retrospect":


This article responds to Jean-Christian Vinel’s assessment of the ‘critical synthesis’ whose proponents created labor law history as a new and flourishing field of scholarship in the decade after 1978. Vinel accords my book, The State and the Unions (1985) a key role in the development of this new field. Here, I situate my book in relation to the critical synthesis, and assess the capacity of critical legal scholarship to address the current parlous state of the U.S. labor movement. I look to current labor historians to engage with and build on the work that the labor law historians undertook.