New from Yale University Press: Hollow Justice: A History of Indigenous Claims in the United States (2013), by David E. Wilkens (University of Minnesota). The Press describes the book as follows: 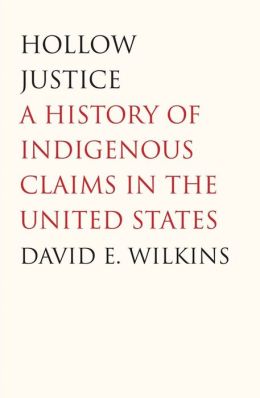 This book, the first of its kind, comprehensively explores Native American claims against the United States government over the past two centuries. Despite the federal government’s multiple attempts to redress indigenous claims, a close examination reveals that even when compensatory programs were instituted, Native peoples never attained a genuine sense of justice. David E. Wilkins addresses the important question of what one nation owes another when the balance of rights, resources, and responsibilities have been negotiated through treaties. How does the United States assure that guarantees made to tribal nations, whether through a century old treaty or a modern day compact, remain viable and lasting?


“There are a good number of books on the subject, but none provide the scope that this one does. . . . I can surely see this becoming the standard book to which people turn when wanting to know the story of Indian claims.”—Christian McMillen, author of Making Indian Law: The Hualapai Land Case and the Birth of Ethnohistory

“A highly readable and important study on the history of Native claims against the United States. . . . To my knowledge, this is the first sustained scholarly effort to link the acts of promise making and the consequences of promise-breaking between the US and the tribal nations with a close examination of the various institutional mechanisms developed over time to resolve those claims.“—N. Bruce Duthu, author of American Indians and the Law

A preview is available here.
Posted by Karen Tani at 7:30 AM