New Release: Chet, "The Ocean Is a Wilderness: Atlantic Piracy and the Limits of State Authority, 1688-1856"

New from the University of Massachusetts Press: The Ocean Is a Wilderness: Atlantic Piracy and the Limits of State Authority, 1688-1856 (May 2014), by Guy Chet (University of North Texas). The Press explains: 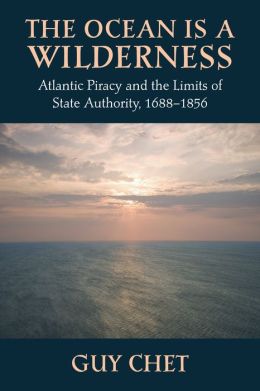 Historians have long maintained that the rise of the British empire brought an end to the great age of piracy, turning the once violent Atlantic frontier into a locus of orderly commerce by 1730. In this book, Guy Chet reassesses that view by documenting the persistence of piracy, smuggling, and other forms of illegal trade throughout the eighteenth century despite ongoing governmental campaigns to stamp it out. The failure of the Royal Navy to police oceanic trade reflected the state’s limited authority and legitimacy at port, in the courts, and in the hearts and minds of Anglo-American constituents.

Chet shows how the traditional focus on the growth of the modern state overlooked the extent to which old attitudes and cultural practices continued to hold sway. Even as the British government extended its naval, legal, and bureaucratic reach, in many parts of the Atlantic world illegal trade was not only tolerated but encouraged. In part this was because Britain’s constabulary command of the region remained more tenuous than some have suggested, and in part because maritime insurance and wartime tax policies ensured that piracy and smuggling remained profitable. When Atlantic piracy eventually waned in the early nineteenth century, it had more to do with a reduction in its profitability at port than with forceful confrontation at sea.

Challenging traditional accounts that chronicle forces of civilization taming a wild Atlantic frontier, this book is a valuable addition to a body of borderlands scholarship reevaluating the relationship between the emerging modern state and its imperial frontiers.


"An interesting, well written, and well-conceived book. The primary sources and the secondary works consulted are extensive and sensible, and the book makes an effective contribution to a number of fields—Atlantic history, maritime history, government and the nature of the early modern state, and international history."—Trevor Burnard

"This thoughtful and persuasive volume is one of the most important contributions to the emerging understanding of the limited reach of state authority and empire during the early modern era. Focusing upon the British government’s inability to stop piracy, wrecking, and smuggling both on the sea and along the coastline of the Atlantic world throughout the eighteenth and much of the nineteenth centuries, this study underlines the vast gap between policy and enforcement within the British Empire, the widespread dispersal of authority endemic to state and empire and indeed essential to their success, and the weakness of metropolitan coercive resources. In the process, Guy Chet makes an overwhelmingly convincing case against those who have uncritically assumed state policy pronouncements can be taken as an accurate indication of how empires worked."—Jack P. Greene