New Release: Lee on the History of Academic Freedom at American Universities

New from Lexington Books: Academic Freedom at American Universities: Constitutional Rights, Professional Norms, and Contractual Duties (November 2014), by Phillip Lee (University of the District of Columbia David A. Clarke School of Law). A description from the press: 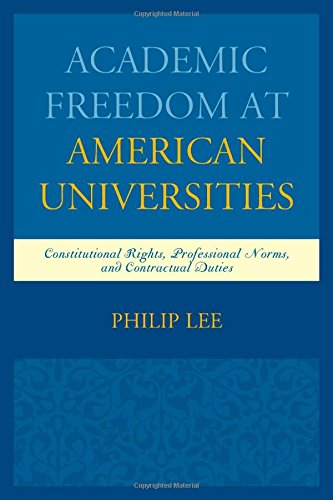 This book details the legal and historical development of institutional and professorial academic freedoms to better understand the relationship between these concepts. While some judges and scholars have focused on the divergence of these protections, this book articulates an aligned theory that brings both the professorial and institutional theories together. It argues that while constitutionally based academic freedom does its job in protecting both public and private universities from excessive state interference, or at the very least it asks the right questions, it is inadequate because it fails to protect many individual professors in the same way. This solution entails using contract law to fill in the gaps that constitutional law leaves open in regard to protecting individual professors.

Contract law is an effective alternative to constitutional law for three reasons. First, unlike constitutional law, it covers professors at both public and private universities. Second, it allows for the consideration of the custom and usage of the academic community as either express or implied contract terms in resolving disputes between universities and professors. Third, contract law enables courts to structure remedies that take into account the specific campus contexts that give rise to various disputes instead of crafting broad remedies that may ill fit certain campus environments.


Philip Lee makes a major and welcome contribution to the burgeoning literature on academic freedom through his current and cogent analysis of major court cases. He devotes special and justifiable attention to the singular role of the American Association of University Professors, which providentially observes its centennial this very year. The constitutional evolution of academic freedom which Lee traces through the past century also receives meticulous understanding in the broader context of higher education law and policy. Perhaps most notable is a concluding chapter which uniquely addresses contract (rather than constitutional) law as an alternative basis for protecting free expression on the university campus. -- Robert O'Neil