New Release: Pliley, "Policing Sexuality: The Mann Act and the Making of the FBI"

New from Harvard University Press: Policing Sexuality: The Mann Act and the Making of the FBI (Nov. 2014), by Jessica R. Pliley (Texas State University). A description from the Press:

America’s first anti–sex trafficking law, the 1910 Mann Act, made it illegal to transport women over state lines for prostitution “or any other immoral purpose.” It was meant to protect women and girls from being seduced or sold into sexual slavery. But, as Jessica Pliley illustrates, its enforcement resulted more often in the policing of women’s sexual behavior, reflecting conservative attitudes toward women’s roles at home and their movements in public. By citing its mandate to halt illicit sexuality, the fledgling Bureau of Investigation gained entry not only into brothels but also into private bedrooms and justified its own expansion. 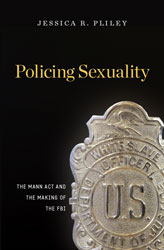 Policing Sexuality links the crusade against sex trafficking to the rapid growth of the Bureau from a few dozen agents at the time of the Mann Act into a formidable law enforcement organization that cooperated with state and municipal authorities across the nation. In pursuit of offenders, the Bureau often intervened in domestic squabbles on behalf of men intent on monitoring their wives and daughters. Working prostitutes were imprisoned at dramatically increased rates, while their male clients were seldom prosecuted.

In upholding the Mann Act, the FBI reinforced sexually conservative views of the chaste woman and the respectable husband and father. It built its national power and prestige by expanding its legal authority to police Americans’ sexuality and by marginalizing the very women it was charged to protect.


“A fascinating, first-rate study. Using a remarkable trove of documents in the Bureau of Investigation’s white slavery files, Pliley resurrects a lost history of conflicts over gender, sexuality, masculinity, disease, and deviance in the early twentieth-century United States.”—Beverly Gage

“A brilliant, counterintuitive history of the FBI that takes women from the margins—party girls and runaways, adventurers and adulterers, hardened hustlers and delinquent daughters—and shows how they were central to the rise of federal power in America. Written in crystal clear, jargon-free prose, and brimming with important insights, Policing Sexuality is a major contribution to the histories of sexuality and government surveillance, and will be required reading for anyone interested in the sex trade, past, present, or future.”—Debby Applegate

Back in the Fall of 1952 in ConLaw taught by the late Thomas Reed Powell the focus of ConLaw was the Commerce Clause. Prof. Powell briefly discussed the Mann Act and its constitutional bases, concluding that a violation of the Act depended upon whether the event was for "pure pleasure" or "purely for pleasure."

1. In a class discussion of Buck v. Bell, I took the position of Justice Holmes. Then Prof. Powell proceeded to excoriate me from stem to stem. I responded with my tail between my legs, "Professor, the next thing you're gonna do is call me a Republican." Prof. Powell retorted: "Those are the guys that'll agree with you."

2. In the Fall of 1952 the presidential campaign brought to Boston Common GOP candidate General Ike and his running mate Richard Nixon on the day of a ConLaw class (which was in the early afternoon). As Prof. Powell came into the classroom, many students were missing. He wondered if he had come too early. I informed him that Republican students were at Boston Common to see and hear their candidates. Prof. Powell commented: "They'd learn a heck of a lot more here than listening to those guys." (This was back before there was a Federalist Society, which perhaps would more accurately be described as the "Anti-Federalist Society." And of course this was before the Warren Court.)

[Note: A few years back, I recall a Vermont Law School professor was planning a book on Prof. Powell. Alas, I don't think it's still in the works. Perhaps a young legal historian will take on this task.]