New from Cambridge University Press: Doubt in Islamic Law: A History of Legal Maxims, Interpretation, and Islamic Criminal Law (Dec. 2014), by Intisar A. Rabb (Harvard Law School). A description from the Press: 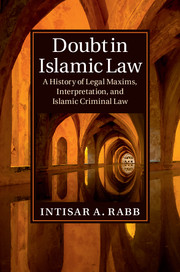 This book considers an important and largely neglected area of Islamic law by exploring how medieval Muslim jurists resolved criminal cases that could not be proven beyond a doubt. Intisar A. Rabb calls into question a controversial popular notion about Islamic law today, which is that Islamic law is a divine legal tradition that has little room for discretion or doubt, particularly in Islamic criminal law. Despite its contemporary popularity, that notion turns out to have been far outside the mainstream of Islamic law for most of its history. Instead of rejecting doubt, medieval Muslim scholars largely embraced it. In fact, they used doubt to enlarge their own power and to construct Islamic criminal law itself. Through a close examination of legal, historical, and theological sources, and a range of illustrative case studies, this book shows that Muslim jurists developed a highly sophisticated and regulated system for dealing with Islam's unique concept of doubt, which evolved from the seventh to the sixteenth century.