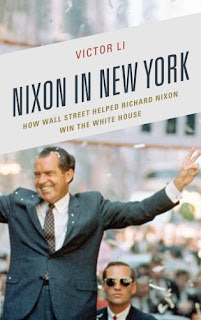 Richard Nixon’s loss in the 1962 gubernatorial election in California was more than just a simple electoral defeat. His once-promising political career was in ruins as he dropped his second high-profile race in as many years. Nixon, himself, rubbed salt in his own self-inflicted wounds by delivering a growling, bitter concession speech that made him seem like a sore loser. In the months following his defeat and self-immolation, he left California to move to New York so that he could work for a prestigious Wall Street law firm. His new career only seemed to confirm what everyone already knew: Richard Nixon was finished as a politician.

Except, he wasn’t. Nixon’s political resurrection was virtually unprecedented in American history role, and he had his law firm to thank for paving his way to the White House. His role as public partner at Nixon, Mudge, Rose, Guthrie & Alexander was the ideal platform for him as he looked to reinvent himself after his back-to-back losses in 1960 and 1962. Nixon’s firm gave him access to deep-pocketed clients, many of whom became donors when he decided to take the plunge in 1968. Furthermore, working for so many international clients allowed him to travel the world and burnish his foreign policy credentials – a vital quality that voters were looking for as the Cold War raged on and the Vietnam War showed no signs of slowing down. Nixon’s time at the firm also allowed him to build a formidable campaign staff consisting of top-notch lawyers, researchers and writers – a staff that did just about everything for him when it came time to ramp up for the 1968 campaign